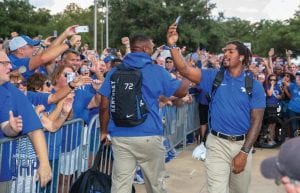 Kentucky fans turned out in force to support the Wildcats in last week’s game at Texas A&M. (Jeff Houchin)

Western Hills standout Wandale Robinson will now make his college choice Nov. 1. He originally planned to make it earlier — maybe even this week after last weekend’s visit to Ohio State — but he changed it after the death of his cousin, Shannon Davis, last week.

He ran for 200 yards and four scores, returned an interception 98 yards for a score, caught four passes for 37 yards, completed four passes for 64 yards, made 14 tackles and forced three fumbles against Catholic.

He said he never considered not playing because of his cousin’s death.

He now has 1,377 yards and 21 touchdowns on 131 carries this year — an average of 10.5 yards per run — and has 16 catches for 365 yards and seven scores. He has two interception returns for scores along with 42 solo tackles, 27 assists and four tackles for loss.

“I love defense. I am not being recruited to play defense obviously, but I love playing defense. I do a pretty good job of it, too,” he said.

Kentucky coach Mark Stoops understands what his team’s impressive start this season has meant to fans and others.

“If you play football in the SEC and have success it has a great impact on your community and university,” Stoops said. “We appreciate (UK president) Dr. (Eli) Capuloto and same with (athletics director) Mitch Barnhart.”

There has even been love for the UK football program from John Calipari.

“Coach Cal and I are buddies. I am his biggest fan,” Stoops said. “When I go to a basketball game I can be spectator and see how wild and crazy our fan base is, and I love it. He feels the same way at a football game.”

Stoops understands UK fans have not always been happy with the time it has taken to rebuild the Kentucky program. However, he understands that passion.

“I take pride in what our team looks like. How we play is a direct reflection of myself. I try to make the community and fan base proud and I am glad so far this season we have done that and we plan to keep doing that,” the UK coach said.

Kentucky didn’t play its best in a 20-14 overtime loss at Texas A&M last week but it was still obvious how excited fans were because thousands made the trip to watch UK.

“That was big. I don’t know how many miles that is (for fans to travel) but it is far away,” Kentucky safety Mike Edwards said. “We have the best fans in the country. To come all this way and support us was big. I thought we were playing at Kroger Field at times. They got loud.”

Stoops said it was amazing when the team got to the stadium in Texas.

“To pull up and see all the blue, just meant a lot to us. We felt them (the fans) out there and guys were looking up to them. I just wish we could have made a couple more plays to finish the game off,” Stoops said.

Running back Benny Snell says Kentucky has to embrace “being the hunted” and not get derailed by the loss at Texas A&M.

Snell had just 13 carries for 60 yards – both well under his average – in last week’s loss.

Some wondered if maybe Snell had carried such a big load in UK’s first five games that he might have been a bit banged up at Texas A&M. Snell didn’t make it sound that way and insisted durability has always been one of his strengths.

“Give Benny 30 carries, 35 or 40. Benny is always a durable back. You don’t have to worry about him being injured,” Snell said about himself. “I can always take the load.”

My guess is that he’ll get a much bigger load after UK gets a needed bye week and then hosts Vanderbilt Oct. 20.

One consistent part of John Calipari’s recruiting since he arrived at Kentucky is that he always like to target a point guard early to solidify that position and also hopefully use him to help recruit other players.

That’s why it was significant when Calipari recently made his first point guard scholarship offer in the 2020 recruiting class to Jeremy Roach of Fairfax, Va.

“He plays for one of the top programs (Paul VI Catholic High School) in the area that has produced a lot of top guards,” said Samantha Pell of the Washington Post. “It doesn’t surprise me that he has that offer from Kentucky this early because of his skill set. He’s one of the best players in his recruiting class.

He started all seven games in the 2018 Under 17 World Cup and averaged 6.4 points and 2.7 assists per game. He participated in the USA Basketball junior national team minicamp last week.

“I think his versatility is his strength,” Peel said. “His decision making is very good and he can really handle the ball. His on-court vision is one of the best I have seen.”

Roach has offers from Duke, North Carolina, Villanova and many other high major programs along with Kentucky. He’s taking an official visit to Duke this weekend and trying to plan one to Kentucky soon.

“Kentucky is one of his top offers but he’s not done getting offers,” Pell said. “Jeremy is not one to gloat over what offers he has. He’s very humble and he usually doesn’t even like to announce where he has offers from. He usually tells me to tweet it out for him. He could care less if others know. He knows he has the offer, so there is no showboating with him.

“He wants to be part of a team mentality. He doesn’t have to be the star. However, I do think he is enjoy the recruiting process. Who would not enjoy having Calipari wanting to talk to you? At the end of the day, he doesn’t mind the recruiting attention.”

Pell was at Roach’s home with his family the first night college coaches were able to reach out to the player.

“They were so welcoming and nice,” Pell said. “The whole family understands the process, but this is also the first time for them to go through this. They are so humble about it all. He’s just a normal kid. The way he was brought up really shapes who he is and speaks volumes about his character.”

Pell doesn’t think Roach has any college favorite and is in no hurry to limit his options.

“He has his junior season still coming up. Kentucky might see him this season and like him even more or he might see something he really likes,” Pell said. “I think a lot of the top programs will stay in the mix for him for a while. He’s not going to make a rash decision. Him and his family will evaluate everything they do and come up with a decision that makes sense.”

Calipari offered point guard Sharife Cooper of Georgia, the 22nd ranked player in the 2020 class, after he offered Roach. Calipari also made scholarship offers to 2020 guards Jalen Green of California and R.J. Hampton of Texas after offering Roach. Green is considered a shooting guard while Hampton is listed as a combo guard. Green is the No. 2 player in the 2020 class while Hampton is ranked sixth.

“EJ has ridiculous length, wingspan and athleticism,” said Biancardi. “If he applies all that and gets the right defensive mindset to where he can play on and off the ball, he could be great this year. Some things can be hard for a freshman to learn and defense is hard.?

The Kentucky freshman was a late addition to UK’s 2018 recruiting haul but Biancardi thinks he could be special this season.

“If guys don’t jump off the chart, sometimes it is a surprise when they play great,” Biancardi said. “He got ranked high at a young age because he was taller and more skilled than kids his age. Then he leveled off because he was playing with older guys and he struggled. Playing up has benefits but can also have challenges.

“He went from top 10 (in his recruiting class) to top 30, which is still elite. He kind of does things in a spoon-fed fashion. He will feed you a little of what he can do. But once it all comes together at the same time, he could be as talented and skilled a player as John Calipari has had.”

Quote of the Week: “We pride ourself on stopping the run. That’s how you win in the SEC. The SEC is full of monsters you have to stop and Kentucky sure had one (in Benny Snell). I don’t care what anyone says, every team wants to be ranked and we knew this game could do that for us. Beating the No. 13 teams helps a lot. I think we are going to run the table now,” Texas A&M linebacker Tyrel Dodson on beating Kentucky.

Quote of the Week 2: “When he first started getting high major offers I did tell him he had to be more comfortable doing TV and radio interviews because it’s going to be non stop. He’s going to be under the spotlight and microscope the next five years. He has to come out of his comfort zone more because he’s a little introverted. He always led by example and he just has to embrace all this added attention,” Pendleton County basketball coach Keaton Belcher on UK commit Dontaie Allen.