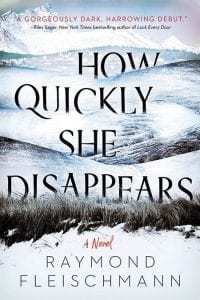 “How Quickly She Disappears,” (Berkley) by Raymond Fleischmann

When Elizabeth Pfautz was a child in Pennsylvania, her twin sister was lured away by a stranger, never to be seen again.

Years later, in 1941, Elizabeth is raising a daughter who bears a striking resemblance to the missing twin. They live with her husband, a schoolteacher, in a remote Native American village in Alaska. There, Elizabeth dreams of her missing sister every night. Although Elizabeth isn’t a woman given to magical thinking, she can’t shake the feeling that her sister is trying to make contact through those dreams.

As Raymond Fleishmann’s debut novel, “How Quickly She Disappears,” opens, a plane that delivers mail to the village has landed with a stranger in place of the usual pilot. And there is something wrong with the plane.

Before the stranger figures out how to fix it, he gets into a dispute with Elizabeth’s best friend in the village, viciously bludgeons him to death and refuses to explain why. The only person he will speak with, he tells police, is Elizabeth.

Reluctantly, Elizabeth agrees to see him, only to find that he has no interest in talking about the killing.

He has a different agenda.

Elizabeth’s twin is alive, he tells her. He knows who took her and where she is now. If she wants to know more, she will have to continue visiting him in jail, each time doing him a single, small favor.

What follows is a high-stakes, cat-and-mouse game that will remind readers of the menacing dance between Hannibal Lecter and FBI agent Clarice Starling in “The Silence of the Lambs.”

Fleis- chmann tells his story with such skill that it is hard to believe this is a debut novel. The characters are well-developed and memorable, the rural Alaska setting is vividly portrayed, the plot is loaded with unexpected turns and the unrelenting suspense creates a growing sense of dread.

Best of all, the author tells the tale with the musical prose of a literary novelist at the top of his game.

Bruce DeSilva, winner of the Mystery Writers of America’s Edgar Award, is the author of the Mulligan crime novels.