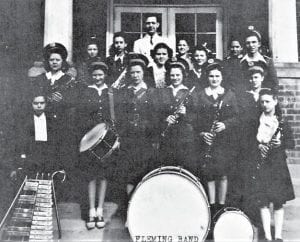 The Girl Reserves had their annual “Mother and Daughter” banquet last Friday evening in the high school library. Of course, it is needless to say that the food was grand and the program was enjoyed by everyone. The toastmaster, for the second successive year, was Miss Lutie W. Adams. The program was as follows: Song, “Put On Your Old Gray Bonnett” – All. Welcome to Mothers, Pearl Welch. Response, Mrs. Cann Bentley. Bright Sayings of Bright Babies, Mrs. S.E. Adams. The Sort of Girl That Mother Used To Be, (musical reading) Frances Fields. Special Music, Juanita and Roberta Whitaker. Headgear of Famous Women, Coleen Elliot and Norma Wright. Yes, My Darling Daughter, Groups and All Mothers. Song, “Ain’t We Had Fun”, All.

Congratulations to Miss Irene Harvath, Girl Reserve Sponsor, for her tireless efforts in making this banquet such a wonderful success. 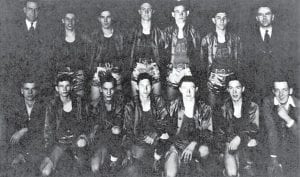 Friday and Saturday, March 28 and 29, Fleming High School became victorious in winning the 15th District Tournament in Debating, held at Hazard. The Debating Team was composed of Robert Preston and Elmo Parish. These two boys have defended the Fleming school in debate all year, and are going to Lexington to the State Tournament to be held this week.

The Pirates played Paintsville there last Friday night, Oct. 18. We were defeated by a score of 7-0. The Pirates really put up some good fighting but for some reason the Paintsville Tigers broke through that strong line of defense to go for one touchdown and extra point. There were several people from Fleming and surrounding towns at the game. The Fleming High School band was there also. They gave the best support they could with their playing and cheering.

The week of Oct. 24-30 is Girl Reserve Week. Each Girl Reserve Club is supposed to contribute a community contribution which will be sent to the Y.W.C.A. In order to raise this money, the girls are planning to sell badges. The public is invited to participate as much as possible in this contribution.

Assembly was held Tuesday afternoon in the high school. Mr. and Mrs. Taber were visiting our school as representatives of the Camp Nathaniel at Hindman. Mr. Tabor spoke to us for a few minutes and Mrs. Tabor played the accordion while Mr. Tabor led the student body in singing choruses. The program was enjoyed very much and it is hoped that they will return to us soon.