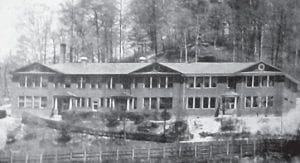 The club is a selective organization and for students to belong they must have a C average or above. The F.T.A. means Future Teachers of America and the students that belong to the club are all planning to make teaching their career.

In future meetings this group will plan projects that will be for the betterment of the club . e

Thursday, Sept. 23, the HI-Y-Club met for the first time this year. The meeting was held to elect officers. Those elected were: Shirley Stevens, President; Angela Holbrook, Vice-President, and Sue Holbrook, Secretary/ Treasurer.

The HI-Y members are glad to have Mr. Fields for their new sponsor. We are sure he will make a grand leader.

They will also pay 50 cents dues, which will be used for any purpose they need it for.

The seniors met on Oct. 6 to elect King and Queen for the Hallowe’en Carnival. Betty Kincer and Bob McKinny were chosen. The seniors had a bake sale Oct. 16, and a sock hop and senior program Oct. 21.

Here is a line-up on the program for those who didn’t see it. Blue Moon was played by Star Duster for opening of the program. The seniors performed an act called Truth or Con- sequences, Calendar Girl Act and other comical acts which were enjoyed by all. The money goes for Senior King and Queen.

Did everyone see the junior play? If you didn’t, then here is a short review of what took place in the Fleming High School auditorium.

Neil Wormsley started the play off by painting a picture with people, which was very amusing. (Ask Mr. Frazier about it). Next came a short act with Shelby Jackson, Nadine Holland, and Martha Abdoo. Last but not least, Liberace seated himself at the piano and played a special boogie for the audience and his mother. By the way, Liberace was THE James Elkins and his mother was a picture of Rita Hayworth.

Then the class put on a “This Is Your Life” show with Patsy Collier as toastmaster. This show included a few of the seniors. The juniors gave a very nice play and hoped that everyone enjoyed themselves.

The sophomore class had their second class meeting Oct. 6, to elect candidates for King and Queen in the Hallowe’en Carnival. They elected Ruby Lou Webb for Queen and Edsol Lewis for King. They also voted to pay $2 class dues.

The freshmen class presented their “Greenhorn Talent Show” Oct. 20. Three skits were given while the contestants were getting ready to perform.

The most talented of the contestants was chosen through the applause of the audience. Both Kenneth Holbrook and Lavonne Elkins received the prize since there was a tie.

The new editor is a wellliked and popular person around here. To prove this, in her junior year, Peggy was voted by the student body as the most popular girl on the hill. Also, in the same year, she was the Carnival Queen. In her freshman and sophomore years, she was class president. “Peg” is a native of Neon. Her hobbies are playing the piano and clarinet. Plans for the future are to go to college and major in elementary education. She sincerely wishes that the school paper is a great success this coming year.

In a hustling scramble for pennies, nickels, and anything that resembled currency, the seniors pushed their amiable candidates over the dollar sign finish line in Fleming-Neon High School’s annual race for King and Queen of the Fall Carnival.

Betty Kincer and Bob McKinny were elected King and Queen for this year.

Betty sold chances on a blanket and had a box supper. In addition she brought candy and cupcakes to school every day to sell.

Bob sold chances on a waffle iron and a watch; he also brought candy and cupcakes to school to sell.

All the candidates for the King and Queen worked hard, but the seniors proved their ability by winning the crowns.

The senior class is really proud of Betty and Bob. They deserved the honor because they both really worked hard.

The crowning of Bob and Betty will be on Friday night at the Hallowe’en Carnival.

(The above articles from the Fleming-Neon Hi Times newspapers)