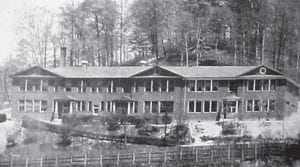 A party at the Fleming- Neon High School on Dec. 15 was sponsored by the Pep Club. Games were played and gifts exchanged. Acting as Santa Claus was Jack Amburgey.

The Tri-Hi-Y and Hi-Y gave a Christmas program in the auditorium of the Fleming-Neon High School. The two introductions were given by Joy Wright, Tri-Hi-Y president, and Joe Trinkle, president of the Hi-Y. Scripture reading was by Jimmie Preston and special singing was by the high school trio, Eunice Hale, Mary Jo Craft, and Jonelle Collier. Christmas in other lands was given by Buddy Curr (Italy), Dorothy Hush (French Canada), Carlie Tolliver (Germany) and Mary Little (Sweden). “My Idea of Christmas” was given by Johnny Welch as Service, Patsy Simms as Love, Roger Jackson as Unselfishness, June Cook as Giving, Bill Kindrick acted as Santa in the gift exchange. The Tri- Hi-Y made up a gift basket for some needy family to be given on Christmas Eve.

The Future Homemakers of America of Fleming- Neon High School made up a basket for some needy family in the community.

The Fleming-Neon basketball team defeaed a team made up of Fleming alumni Monday, Nov. 21. The final score was 51 to 28.

The proceeds of the game go toward support of the recently organized Fleming- Neon band. The amount was $121.93.

It is reported that the community is wholeheartedly behind the band project and that many other events are being planned to support the new organization.

The Fleming-Neon High Pirates defeated the Sevierville boys 20 to 6 for the Pirates’ second win of the current football season. In their opening game two weeks ago they defeated Prestonsburg 19 to 14.

Coach Labe Gregory’s boys defeated a much heavier team when they downed the Sevierville team and the final score was something of a surprise.

Scoring players for the Pirates were Burns, Stapleton, and Hall, with Trinkle and Tucker adding extra points. Outstanding lineman for Fleming was Bobby Ladd, while Kilby was the best for Sevierville. Staffle made the only marker for the losers.

The Pirates have their first home game of the season when they meet Belfry on the Fleming-Neon field Saturday, Sept. 17, at 8 p.m.

A band has been organized at Fleming-Neon High School. Mr. G.T. Slusher of Roanoke, Va., is the director. Mr. Slusher has had 21 years experiece and is very capable.

The Neon- Fleming Grade and High School this year has a total enrollment of 573, according to Principal William B. Hall. In the high school there are 328, 38 more than last year’s alltime record of 290.

The high school enrollment breaks down into 118 freshmen, 110 sophomores, 63 juniors, and 37 seniors. The school began this year’s term Aug. 29.

There are 20 teachers at Fleming this year, one less than last year’s number. Two new courses have been added, home economics II and Folk Club. The Folk Club is part of the school’s physical education program.

The walls of the halls have been painted and the auditorium, lunchroom, and outside trimming also have a new coat of paint.