On Oct. 15, Coach Chaney called a meeting of the boys interested in going out for basketball. As usual a large number of boys met.

Coach Chaney told the boys a little of what he expects them to do. He stated that they will have to use their own equipment until football is over and basketball season is well advanced.

That evening he gave the boys a good workout of hard running to keep them in shape. He was absent the next day but Coach Hall kept the boys running.

All of the boys will admit they are sore, but the ones who really want to play aren’t going to pay too much attention to aches and dislocated legs, they’ll come right back for more.

Practice really begins after Nov. 9 when football is over and the boys who play go out for basketball.

The seniors started the year off with a bang. They have elected Janet Young-President, Joyce Brown-Vice-President, and John Compton-Secretary-Treasurer. We are sure they will be great leaders. 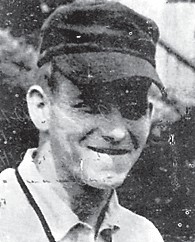 The first sock hop of the season was sponsored by the seniors and was a great success. We are looking forward to many more. They are also sponsoring a dance for the grade school children in which they will teach them to dance.

The first and last Fridays of each month have been declared Senior Days and many new fads will be started. The seniors will be coming to school in the latest fashions.

Everyone please buy purple and gold hats, badges and dolls from the seniors, not only to help out but to let everyone know you are from Fleming-Neon.

The seniors are sponsoring a magazine subscription drive and the goal has been set for $1,500. The seniors selling the most subscriptions will receive many wonderful prizes.

Who has Judy Sims been getting letters from in Florida? Could it be Jimmy S. Judy? Looks like Carol Hope and James H. are hitting it off just fine. Hope B. keeps talking about Ashland. Is it because of Ronnie Q., Hope? Who is James Hill always pestering in Geometry Class? Looks like Sonja still has eyes for only Delmer Cook! Looks like Shelia Howel has added another class ring to her collection, right Billy Harlow? Who have we seen Earnest Johnson standing in the halls with? Could it be Betty Jo Smith? Looks like that good-looking Gary Blevins has finally asked a girl for a date. “Lucky Jeanette Lewis.” Billy Harlow has his eyes on a certain junior. Her initials are Freda Evans. Looks like wedding bells for Darrell Hall and Louise Baker. There are a lot of cute girls running around loose this year. Namely Annette Moore and Betty Davis. 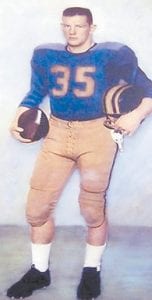 Hill was held out of grid action last fall to provide an additional year of seasoning and chance to familiarize himself with his new guard position. He was a high school fullback and played halfback for the 1958 U.K. freshman team.

His track recognition came as a result of participation in three events for Coach Don Cash Seaton’s Harriers — the discus, shot put and javelin.

The initials F.H.A. mean Future Homemakers of America. This organization’s motto is “Toward New Horizons.” Their colors are symbolic of youth which has courage and determination to succeed, yet has innocence and purity.

The symbol of the Junior Homemakers Degree is the key, which is symbolic of the opportunity to attain a more successful home life which is of great importance. The Chapter Homemakers Degree has the scroll for their symbol. This symbolizes learning experiences for the varied activities of the Future Homemakers.

The state Homemakers Degree has the torch as their symbol which symbolizes a guiding light that challenges and inspires future endeavor.

Some of the purposes of the F.H.A. are to promote appreciation of joys and satisfaction of homemaking to encourage democracy in home and community life, to work for good home and family life for all and to promote international good will. They face the future with good hope and high courage.

We have yet to elect a chapter Mother, but we will in our next meeting.

(The above articles from the Dec. 1957 “Fleming Hi Times” school newspaper)