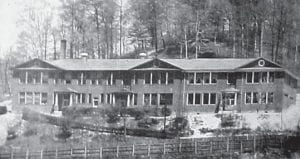 Two of the best liked of the folk games were the Scarf Dance, done with large handkerchiefs, and the Sword Dances, done with both steel and wooden swords. The skill, grace and poise displayed by the participants were very admirable, and the whole performance was one which was greeted with enthusiasm.

After the program the visitors had lunch in the Fleming-Neon lunchroom, before they returned to their campus.

Sometime soon the Speech class under the guidance of Mrs. Hall will take a program to Stuart Robinson.

When the present seniors entered high school, most of them were determined to earn a diploma. As one sign that their goal is near, they expect gold class rings very shortly.

The rings will be flashed daily in the halls and in the classrooms of FNHS. The happy seniors will be envied by freshmen and sophomores, while juniors will eye the rings appraisingly, an anticipation of their own, not too distant glory.

The fact that the rings will have only a sentimental value will not affect the joy they will bring to so many handsome seniors.

The rings are here now as everyone can see the 10-k gold flashing around.

Has anyone noticed the pride and joy of the senior boys? Those are beautiful sweaters, boys; we certainly are proud to see you wearing them.

These sweaters are symbols of many hours of hard work and of many hard falls and licks taken and given for Fleming-Neon High School. The student body should honor and respect those who have laboriously worked to earn these coveted awards.

Fleming came out with a lead for the first few minutes of the game and then Wayland took the lead and kept it through the first quarter with a score of 19 to 14 in their favor. The boys were really fighting but couldn’t get ahead and at the end of the second quarter Wayland was still ahead 28-21.

The boys came back fighting and took the lead at the third quarter 42-35 and kept it through the remaining of the game but it was hard for the last few minutes of the game but F-N came out on the top with a score of 52-47.

High point man for Fleming was Williams and Murphy with eight points each and Patrick, Hawley and Cox playing an outstanding game. Yonts played a good game.

High point man for Wayland was Griffith with 14 points. Fleming and Wayland’s B team was also an interesting game. F-N won that one with a score of 37- 25. High point man for F-N was Quillen with 15 points. Joe Broome came in next with six points and he also played a fine game.

Oscar R., does Eunice know how you flirt with all the girls here at school?

Nemo, do you still like that boy from Virginia? His name is Hershel Stallard, isn’t it?

Who is Ruth Welch struck on? It wouldn’t be Bobby Craft, would it?

Darrel Looney is roaming the halls of Fleming-Neon looking for a girlfriend. Anyone interested can usually find him somewhere in Neon at night.

Who is Millie Bentley’s new heartthrob? If it isn’t Bobby Reach, then who is it, Millie?

Watch out for a storm, people, because the way Bobby Welch and Joyce Broome are dating there’s liable to be a cloudburst.

Ruby R., aren’t the boys at Fleming well off enough for you that you have to go to Whitesburg to get your boyfriend?

Why can’t you girls wake up to that good-looking Douglas Beckett? He is very nice and has a sense of humor, too.

Elmer Ison, who is your heartthrob now? Is it still Betty Faye Adams?

Lois E., are you and Doug Beckett still dating? We don’t see much of either one of you anymore. You aren’t hiding from us, are you?

Wonder which one Tommy Fuller will take — Wanda Jo or Roberta? Confidentially I think Roberta is cue. So, Tommy, wake up.

Wonder why Mildred Holbrook is always looking over Doug Adkins in Geometry class? Could it be she has a crush carried over from last year?

Joe Broome and Helen Wright are seen together a lot. Could it be that something is brewing?

Daisy Hush, you aren’t having much competition with Charles H., are you? Is your competition Ida Cureton?