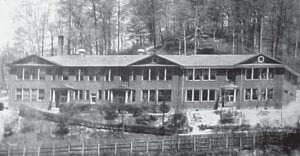 The Cheerleaders sponsored another Sock Hop, Tuesday, Sept. 28. A large number of people were there. Soft drinks were sold and everyone seemed to have had a good time. The Cheerleaders now have enough money for the new uniforms and are hoping to have them before Basketball season.

The Journalism Class sponsored a Wiener Roast, Wednesday, Sept. 30. Each person in the class had the privilege of inviting a guest. Hotdogs, potato chips, marshmallows and Kool-Aid were served. The Weiner Roast was given at the home of Miss Connie McAuley, the Journalism Class Advisor. There was dancing also. Everyone had loads and loads of fun.

A hayride was given by the Journalism Class, Saturday, Oct. 2 on Pine Mountain. Again, the class had the privilege of inviting a guest. Everyone took their own lunch. Two truckloads went and everyone had fun.

A sock hop was given by the seniors, Tuesday, Oct. 5. Approximately 120 students attended. The money goes into the fund for the trip. Everyone had fun.

A birthday party was given in honor of Billie Jo Dunn, Saturday, Oct. 2. Sandwiches, Cokes and cake were served. Billie was 18 on Sept. 27. Everyone enjoyed the party.

The Fleming Pirates marched out on the field to meet an underdog team although Stuart Robinson’s line out-weighed Fleming-Neon’s. Tyrone Bentley made some tremendous run-backs on kick-off plays, gaining a lot of yardage. When both teams left at halftime, the score was 20 to 0 in Fleming-Neon’s favor.

The Fleming eleven came back in the second half to overpower Stuart Robinson by 21 more points while holding them scoreless. The final score Fleming-Neon 41; Stuart Robinson 0, with Tyrone Bentley scoring 3 touchdowns for 18 points, O.C. James scoring one for 6 points, Red Potter scoring 2 for 12 points and James Hill scored 4 extra points for Fleming-Neon.

Say, Mary Lee, who is it now? Wouldn’t be Donald Y., would it? Say, Charles, who is the cute girl you are after now? Would not be Barbara Y.,, would it? What’s wrong with Peggy Brown and Shirley Mason? I think they are having a hard time with Linda Vance. Twila J. Potter and Clarence make a nice couple. Good luck, kids! Looks as though Clara and Buel, Jr. are going steady.

You know them by

Janice to Truman Sexton“ Little Things Mean a Lot”. Eleanor Burns to Kenneth H.- “Fortune in Dreams.” Sally to Billy M.- “I’m a Fool to Care.” Daisy to Ernest- “Until Yesterday.” Jack to Ruby- “I Understand.” Nancy Warf to Jr. Thomas- “Tell Me Why.” Pat S. to O.C.- “Tell Me, Tell Me.” Betty A. to Harold- “You Belong to Me.” Sixth period to Mr. Morgan- “Hold My Hand.” Mr. Frazier to first year Typing Class- “Slowpokes.” Anna Warf to Dickie Quillen- “Stranger in Paradise.” Bobby H. to Marlene Robbins- “Why Don’t You Believe Me?” Shirley P. to Jimmy Husk- “Three Coins in the Fountain.” Betty K. to Bufford Hunnicut- “Ebb Tide.”

Looks as if Joyce Compton took our advice and gave Bobby Gish another chance. Hope you two make a go of it this time. Wonder who Delores Potter is waiting for. Couldn’t be Lynn Patrick, could it, Patrick? Wonder who Dorame Stevens has her eyes on. Could it be Donnie Skaggs? Wonder why Truman Sexton keeps coming to Neon. Could it be because of Janice Hansel? Girls! I know another cute boy that’s among our most eligible bachelors now and he goes by the name of Ray Murphy. Get busy, girls. Better open those eyes, girls, because Leon Sergent is on the loose. He’s a cute and real sweet boy. Get to work. Ida Lee Cureton and George Lundy are still the same old way. Hope they always stay that way. Phillip Mullins seems to have some of the girls walking on clouds. Come on, Phillip, and give them a chance. All the girls up here seem to be crazy about Billy W. Ables. The poor boy had better watch his step, huh! Wonder why Wanda Bostain likes Jenkins so well. Could it be because of Burton Arnett? We would like to get something straight, is Judy Sims giving Dewey Spears a hard time or is it the other way around? Anna Ruth Warf, why don’t you break down and give Dickie Quillen a date. He’s really a cute boy. I wonder what went with Jimmy Quillen’s class ring. Couldn’t belong to a girl over at Jenkins could it, Jimmy? I wonder if Daisy Hush will be hearing wedding bells soon after Ernest Lively comes home for Christmas. Wonder if Sandra Skaggs would tell us who her dream man is up here at school. We would like to know, Sandra. Sandra Hope Addington, have you got a crush on James Elkins or is that just gossip?

(The above articles from the October 1954 Fleming-Neon Hi Times)