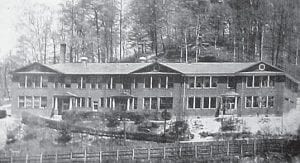 Everything is in readiness for the opening performance of “Flying High” tonight at 8 o’clock in the Fleming-Neon High School Auditorium, Director Madeline Thomas says.

“Flying High”, a three-act comedy, has met with the most favorable response wherever it has been produced. Miss Thompson, who has had extensive experience in this type of work, says she is well pleased with the cast and is anticipating one of the finest productions she has ever directed.

The local talent show is for the benefit of the Neon Volunteer Fire Department.

“Flying High” is the story about a small hotel “Purdy’s Last Resort”, operated by Jeb T. Purdy and his orphaned granddaughter, Mary Lou Milford, played by Morris Morgan and Nina Faye Quillen. Jimmy Morris has the part of Beulah Potts, outspoken maid at the hotel, who “wishes the guest were relatives so we could insult them and they’d leave.” 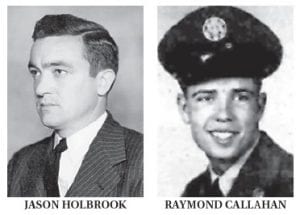 Guests include Mrs. August Van Sneerington, Madeline Thompson, her “lisping” son Robert Brud Lequire, and Professor Boomer K. Barnsmeller, who is on a top-secret mission for the government.

Clyde Stapleton plays the part of Professor Barnsmeller. Mrs. Jerry Quillen enacts the role of Gabby Hawkins, the nosy neighbor who knows everything that goes on — and tells it. Villain in the play is Titus Pinchem, played by Chick Lequire, and the hero is Ted Sterling, young inventor who is in love with Mary Lou. Jimmy Morris plays the Ted Sterling part. Betty Burns interprets the role of Betty Green, breezy young friend of Mary Lou.

The first football clash between Letcher County schools took place at Fleming Neon Saturday night as the Pirates initiated Stuart Robinson’s beginners into the ranks of eleven-man football by downing the Eagles 25-0.

Stuart Robinson put a scare into Pirate fans on the opening kickoff by recovering Fleming-Neon’s fumble of that kickoff, but the Pirates eased their followers’ minds by holding for downs and taking over on their own 20-yard line and marching all the way for a score.

Highlighting the drive was an end sweep for 30, a quickie through the line for 10, a short pass for 10, a long pass from Lynn Patrick to Jack Murphy into the end zone for the tally. The pass was good for 28 yards. Burns’s kick for a point was no good.

Fleming-Neon added another score in the second quarter when Patrick drove off tackle on the 25-yard line and went over standing up. Burns converted the point and the Pirates led 13-0 at halftime.

Fleming-Neon added another score in the second quarter when Patrick drove off tackle on the 25-yard line and went over standing up. Burns converted the point and the Pirates led 13-0 at half-time.

The Pirates enjoyed their best quarter after the intermission by scoring twice on a 35-yard end sweep by Reynolds and a 20-yard scoring romp by Pratt. Burns missed on both conversions. During that third quarter, Stuart Robinson knocked at Fleming-Neon’s goal, going to the four-inch line and being thrown back by Neon’s bigger line on two tries for a score.

Raymond Callahan, son of Mr. Oscar Callahan of Seco, has entered the Airplane and Engine Mechanic’s School at Sheppard Air Force Base, the home of the largest technical school of this type in the world.

Upon his graduation he will be awarded the rating of Airplane and Engine Mechanic. Along with the majority of graduates in his class, he will enter a course for advanced training or will be assigned to one of the major Air Force commands for on-the-job experience with first-line operational aircraft after completion of his schooling.

Airman Callahan attended Fleming High School prior to his entrance into the Air Force Jan. 13, 1953.

(The above article from the May 1953 The Mountain Eagle)

Jason Holbrook will begin his first year as Principal of the Fleming-Neon High School Monday morning when an expected large number of freshmen will register at the school at 8:30. Other classes will register Tuesday and classwork begins Wednesday.

A teacher in the county for 22 years, Mr. Holbrook replaces William B. Hall, who was transferred from the Fleming-Neon school to the Kingdom Come High School as principal earlier in the summer.

First, to those who know very little about me, I will be a little personal and give a brief history of myself.

I finished the 8th grade in a one-room school at the head of Craft’s Colly. I wanted to continue my education, but school was seven miles from where my parents lived. After walking over poor roads 14 miles a day for two years, I found it almost too difficult to continue, so I borrowed money and entered Morehead School, where I earned my first certificate to teach at the age of 18.

Since that time I have earned a B.A. degree from Georgetown College, have done graduate work at Morehead State College and have taught school for 22 years.

While in school, I married a young lady from Greenup, Kentucky, Miss Sabra E. Hillman. We now have five children, and two will be in high school this year.

I have about the same problems of family life as any other average family may have. With this experience and the many years of experience in the schoolroom working with some of your children, I feel that I know many of their problems and needs. I want to say here that I have the interests of the young people at heart in developing leadership and good citizenship. They are all deserving and we owe it to them.

I come into your community to work with you. I hold malice toward none. I earnestly solicit your cooperation. Without it our cause may be defeated. Let us work to the same end, the child first. “Where there is unity there is strength.” All working together, we will have a good school. We will make some mistakes, no doubt, but with all pulling together they will be fewer in number.—Jason Holbrook.