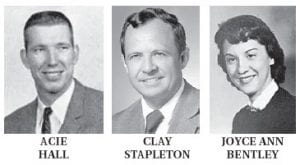 1958
Morehead gets Hall of Fleming

Acie Hall, 6-6 Fleming- Neon High basketball star who averaged 24.3 points a game as a senior, has signed a grant-in-aid at Morehead State College.

A rugged 210-pound youngster, Hall averaged 25 rebounds a game in his senior year.

Hall is the second 6-6 high school star to sign at Morehead in the last two weeks. Doug Cundiff, much sought-after Breathitt County star who averaged 28.6 points a game as a senior, was signed by head basketball coach Bob Laughlin earlier.

“Acie is a superb rebounder and fine shot and we are elated that he has decided to attend Morehead State College,” said Laughlin.

Hall scored 584 points in 24 games as a senior and averaged 21 points as a junior. His single game scoring high during the past season was 57 points.

Joyce Ann Bentley, daughter of Mr. and Mrs. Floyd Bentley of Jackhorn, Ky., is the Treasurer of the Sophomore Class at Morehead State College. She is a home economics major. Joyce is an active member of the Home Economics Club, the Mystic Club and the Baptist Student Union. She is also a majorette for the Morehead State College Band.

Stapleton’s appointment concluded a 10-day search by the Cyclone Athletic Council for a successor to Jim Myers, whose controversial departure to Texas A&M, January 22 created the coaching vacancy.

The 36-year old Stapleton had been considered the leading candidate for the position, although the council interviewed six coaches on the campus in the past three days.

Stapleton played guard at the University of Tennessee in 1940 when Myers was at the other guard position.

He has served a coaching apprenticeship at Wofford, Wyoming and Oregon State.

All through his career, Stapleton has been associated with the balanced-line singloe wing, which the Cyclones employed successfully under Myers last fall.

Stapleton, known as “Stud” to old cronies since his high school days at Fleming Neon High School, is a son of Mr. and Mrs. Paul Stapleton of Haymond. His wife is the former Edith Tucker, daughter of Mr. and Mrs. Sam Tucker of Neon.

Given a three-year tenure at $24,000 a year, he plans a staff of five assistants.

Note: Coach Stapleton was inducted into the Hall of Fame in 2006. Some of his accomlishments were: Took Oregon State to a pair of Rose Bowls during his three-year coaching tenure; As Athletics Director, he was instrumental in planning for a new football stadium and basketball facility and also hired Jonny Majors as football coach; Iowa State finished among the Top 12 teams nationally in rushing six years in a row (1958-63) and had the Big Eight’s top ground gainer four straight seasons; Coached the 1959 Cylones — better know as the “Dirty Thirty” — to a 7-3 record, just missing an Orange Bowl invite after losing to national power Oklahoma in the final game; Operated an unusual single-wing offensive attack that relied on quickness and deception.

Coach Rex Chaney’s Fleming Pirates added two more victims to their list in capturing the Wallins Invitational Tournament at Wallins Friday and Saturday night. Hall and Wallins became the sixth and seventh teams to fall before the precision attack of the Pirates.

In Friday night’s first round action Fleming disposed of a good Hall “Five” 66 to 59 with Ross Chaney getting 19 points for the Pirates. Hall’s Shepherd however, led all scorers with 20 points.

Fleming took the lead early in the ball game and were never headed, although it was anybody’s game until the final seconds when the Pirates went in front by seven.

In the finals Saturday night, Fleming had an easier go of it in whipping the host team Wallins, 66 to 49. The Pirates were never seriously threatened as Hall and Chaney registered 21 and 14 points respectively. Chaney put on quite an exhibiton of dribbling throughout the second half. Wallins’s Jarvis led all scorers with 22.

Fleming’s Chaney and Baker were selected to the All-Tournament along with Hall’s Shepherd and Collier, and Wallins’s Jarvis.

(The above articles from the 1958 Mountain Eagles)