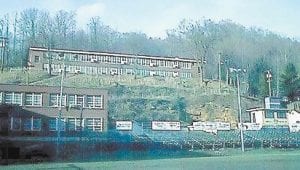 Ms. Angela Denise Bentley’s entry was chosen as one of the winning essays in this year’s Mountain Heritage Essay Contest. She is a senior at Fleming-Neon High School, where she has maintained a 4.0 GPA. She is the daughter of Chuck and Connie Bentley of Jackhorn. Angela is a member of the Lady Pirates softball team and has been named Academic All-State the past three years. She is a PSI leader, a member of the Teens-Need-Teens and a member of the Y-Teen club in her school.

The Tie That Binds by Angela Bentley

For many years, Eastern Kentucky has been known for its numerous feuds, such as the Hatfields and McCoys. That is until the Friday night, local school athletic games. You can almost guarantee the Hatfields and McCoys were sitting right there beside each other when the hometown team was playing, each cheering and yelling with the best of them. For a couple of hours, all differences were set aside and everyone was pushing for victory. Sports brought everyone together with a feeling of pride, community, and closeness. I feel this is still true today.

In the mountains, sports are the one driving force that makes everyone feel pride in being a part of something so special. Everyone fits in somewhere, whether you are a player, a cheerleader, band member, or just a diehard fan, you have a place. The bickering and fighting stops with the kick of a football, the swing of a bat, or the bounce of a basketball. The worst of enemies will be standing side by side chanting. No matter race, age, sex, or religion when you hear the school fight song, you’ll stand up and cheer

Perhaps the reason everyone stands up and cheers the school fight song is the tremendous pride the communities in Eastern Kentucky possess. There is nothing like stepping into a gym filled with screaming fans during a pep rally. The sound of trumpets, the school colors on every person, and the cheerleaders’ smiling faces fill the building. The team could be the best or the worst, but there is always pride. I know I will always have pride in my school and county. People can put us down by calling us hillbillies and hicks, but they can never take away our pride. Pride in the mountains is different from other places. Here pride is undying and never ending.

Eastern Kentuckians feel such pride because they feel connected to the school and their teams. Even those who don’t play can be heard bragging over a touchdown or a basket. These people may not know the players personally, but still, they call out their names like they have known them forever. You always feel like you belong in Eastern Kentucky communities. I can’t recall how many times I have seen alumni of various schools come from miles away to attend homecoming games. The greatest connect of all is it doesn’t matter if you have moved 1,000 miles away, you always feel bonded to this area.

Pride, community and closeness are strong reasons why sports are truly the tie that binds in Eastern Kentucky. Sports have played a huge part in the heritage and tradition of this area. Just as coalmines have separated this area from others, sports have had the same effect. I seriously believe that you cannot go anywhere else and find people so tightly bonded by sports. I am reminded of the words to a popular country song, “every Friday night there’s a steady cloud of dust, that leads out to a field . . .” These words bring to mind pictures of Friday night ballgames in Eastern Kentucky, where sports are the tie that binds.

(The above article from the Sept. 27, 1995 Letcher County Community Press.)

As an exciting tradition at Fleming-Neon High School Saturday night, Feb. 24, we honored seven outstanding men and two fine young women. Our annual Senior Night recognizes the accomplishments of both the Pirates basketball team and the determined cheerleading squad.

The mighty Pirates basketball team consists of the following seniors:

The cheerleading squad is led by our great senior co-captains:

To the team and the squad, we commend you on a season well done. Good luck in the future, and we’ll miss you when your senior year comes to an end.

Here at Fleming-Neon High, it has been a tradition to honor senior athletes for their tenacity and dedication.

On Thursday, Feb. 22, 1996, coaches Doug and Sue Kincer, honored their young ladies for their leadership and excellence through the years of being a member of the Lady Pirates basketball team.

During the pre-game ceremonies the parents and their daughters were recognized by walking onto the court. The athletes and parents are as follows:

Introduction to Business students have been studying a unit on Banking and its many benefits and services. They have completed several performance activities in regard to having a checking account, keeping a check register, and reconciliation (balancing a checkbook) of a bank statement. A field trip to First Security Bank is planned as a culminating activity. The next unit will be Income Tax.

Students in German I are learning how to write and speak in the future tense. This involves changes in sentence structure as related to English. The performance based events scheduled for the next six weeks include: family description, blueprint, labeling of a house, and conversations dealing with weather and ordering different kinds of ice cream.

German II students will be completing their first translation of a complete German novel. Once this is completed, they will begin a performance-based event involving complete German communicative interactions. This is going to be very interesting!

Students have previously ordered dinner, gone out on dates, dealt with a medical situation, toured an airport and boarded a plane, checked into a hotel, handled a classroom lesson, and performed an impromptu conversation. These performance events have all been performed in German.

The technophobes (devotees of anything high tech —especially computers) of Introduction to Computers are becoming proficient in the usage of Windows software. They have been using their skills to do Portfolio assignments for Math and English. They are presently learning the basics of establishing a Database that shows-the next “Bill Gates” (Chairman of Microsoft and syndicated columnist) may emerge from this group.

Typewriting I students have been learning the proper format for manuscripts, reports, essays, portfolio assignments, etc. by processing multi-page documents complete with title pages and references/ bibliography if applicable.

(The above articles from the March 6, 1996 Letcher County Community Press.)