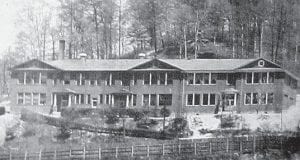 The senior class has been working very hard to raise money for the senior trip. They are now selling chances on a doily set.

The seniors will sponsor a Christmas dance sometime during the Christmas holidays. There will be further notice on the dance before the holiday begins.

The junior class had another class meeting and gave out two more boxes of Christmas cards apiece, and that completes it. So, if you need some Christmas cards see any junior.

Bascum Peters wishes to express his opinion on the advertisements he has been getting in the Fleming-Neon Hi Times. Mr. Peters said, “The ad I have been buying has increased my business and it is the best thing I can do for my business. I advise everyone to buy an ad from the Journalism Class of Fleming-Neon High School.”

In addition to helping your business, it helps the Journalism Class of Fleming Neon.

The game started off with a bang! Fleming was out in front 8 to 0 in the first two minutes of play. Fleming used the weave in the first half and opened a lot of plays, especially under the basket for Ray Murphy. In the first three quarters Fleming stayed from 12 to 14 points in the lead until the last quarter when Dorton came back with a fastbreaking team to get within one point of the leading score within less than two minutes to go. But Fleming held the rebound percentage and held possession of the ball while scoring 64 to 60.

Dora Stevens and Donnie Skaggs sure do make a cute couple. Let’s keep it like that, kids. Wonder why Louise Maman isn’t going with the boys up here. Could it be because of Frank West, Louise? I wonder why Polly Adams looks so happy. Could Jimmy Tolliver be the answer? Say Helen Taylor, why do you keep going to the post office so often? Could it be you’re looking for a letter from Kent Morton? Wonder why Carol Webb looks so happy now? Could it be because she and Bruce Mullins are back together? Nannie Hampton, will you please tell us why you like Government class so well. Could Leonard Thompson be the answer? We see why Mr. Morgan has his class ring back, Helen had to make room for another ring Mr. Morgan gave her. Angie Holbrook, why don’t you and Neal Wormsley quit all this nonsense and get back together? There isn’t any use of all this stuff. Hey Peggy Burkich, why do you have these Christmas bells in your eyes? Could it be because Donnie Cline is coming in? Well, Martha Abdoo, who is that cute boy from Stuart Robinson you have a crush on? Could it be a Holbrook? Shirley King, what’s that we hear about you and Arthur Dunn exchanging letters? Is that true? Say Lanky Presnell, what’s wrong with you and Betty Ann Reed? Let’s get back together now. Sue Anderson still goes to the post office every day and always finds a letter from Bobby Mullins. Good luck, Sue. Wiley Craft must have a way with the girls or at least he does in the fifth period study hall. Hey Betty Adams, what’s that you are wearing around your neck? Oh! it’s Harold Dean’s class ring. Hey, Ralph Holbrook, how about telling us who your crush is? Is she a Senior? Wonder why Sally Mahan likes Norton so well. Could it be because of Sonny Frazier? Say Monell Webb, which one do you want, Johnny Wise or Joe Quillen? Sally Bentley, who is that cute sailor you were seen with? Was it Bennett Stallard? Good luck, kids.

Fleming’s B team won their second game by just one point. In the first quarter it looked very bad for Fleming who was behind 20-4, but then they settled down and kept closing the margin until at the end they ran up a one-point lead, to end the score, Fleming 39, Jenkins 38.

Fleming journeyed to Jenkins to be defeated the second time by two points. Both teams played good ball, but Jenkins came out on the long end of the score by two points. Fleming 61, Jenkins 63. Two boys had over 20 points each. Goins for Jenkins with 23 points, Ables with 2 points.

The following are sayings we often hear at school. They are more or less ‘bywords’ of the students and teachers. See if you can guess who says them. (1) Raw Deal. (2) Don’t Fool with Me. (3) You ain’t too big to go through that door. (4) Give me some TEETH. (5) That was a jolly one. (6) We’ll have a quiz tomorrow.