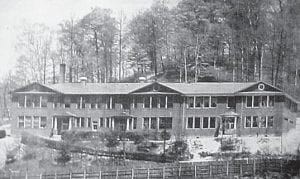 1957-58 The Home Economics Department We have a new Home Ec. teacher this year as we all know Mrs. Elizabeth Jordan. The Home Ec. Dept. has four new electric ranges this year. There are 83 students enrolled in her classes, 20 second-year girls, and 63 first-year girls. Mrs. Jordan says that she is expecting more to enroll soon. We are glad to have you in the Home Ec. Dept. this year, Mrs. Jordan, hope you like it. Election of cheerleaders Wednesday, September 4, 1957, the teachers elected a new cheerleader to take her place with our three old cheerleaders — Dora Stephens, Donna Adkins and Norma Spence. Candidates for cheerleader were Billy Johnson, Gwendlyn Wright, Patty Hall, Anna Warf and Carol Bentley. All the girls were very good and it wasn’t an easy task to choose the winner but the teachers made a very wise choice and selected Carol Bentley. Our cheerleaders have really stood behind our ball players and backed them all the way and I’m sure Carol will do the same. With the help of the band and cheerleaders the student body should really keep cheering and show a good school spirit to the public as well as the ballplayers and all the students. Fleming-Neon enrollment Perhaps you are interested in the enrollment of our school. At the time the enrollment was last counted there were 87 seniors, 87 juniors, 91 sophomores, and 148 freshmen. All total we have 433 students, but there have been quite a number enrolled since we counted them. Our building looks like it’s in fair condition with the new paint job, but we need a lot of material to bring it up to par. Our greatest need is chairs to seat our ever-increasing enrollment. One of the worst things about our school is the floors and stairs make too much noise, and anyone in the halls during classes disturbs the whole school, but as I said before the building as a whole is in fair condition. Band news The crash of the cymbals, the ruffle of the drums and the band is off to a wonderful start this year under the direction of Mr. Robert Welch. We have a new addition, the “B” band students, whom we welcome to our ranks. We hope that they will use their greatest talents in aiding us to become the best band in Kentucky. We were sorry to lose our ex-drum major Ernest Lee Hunter, but we’re happy to have Sandy Skaggs to take his place as drummajorette. The band gave the first of a series of performances to come, Saturday, when the Pirates faced Belfry. The precision with which the “B” for Belfry and “FN” for Fleming Neon were executed revealed that the members of the band are a hard working unit. This performance was bettered last Thursday, September 5, when the band paraded triumphantly through a “C” for Cumberland and our own “FN” for 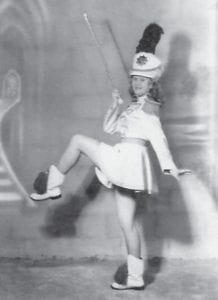 Fleming-Neon. The band is only as good as the students who compose it, so go to the games and back them up, have faith in them and they’ll have faith in themselves. JUNK The new engaged couples in case you don’t know are Monell Webb of Fleming Neon and Ralph Caudill of Jenkins, also Mary Lee Phillips and Jimmy Bentley both of Fleming-Neon. Best of luck to you. I’m glad to see that most of the couples don’t stay together as much as they did last year at school. I think they finally wised up and decided to do their dating at home instead of at school. Seems like all the couples that dated steady last year are still the same, namely Anna Hileman and Fred Northcutt, Kenneth Harlow and Phyllis Hall. Then there are a few new ones and still too, some old ones. I can’t name all of them, but just look around and you will see. Looks like Nancy McKinney finally got the name she’s been waiting for, for about two years now. Her name is Nancy Sweeney, as most of you know. Her husband’s name is Junior Sweeney. Betty Reed and Joyce Brown, when are you going

to change those class rings to another kind? I don’t think it will be long now. Is that right? Wonder why Judy P. likes Whitesburg so much? Could it be because of Charles R.? Looks like Nova L. has got it bad over the little boy from Whitesburg. Namely Paul Anderson. Seems like there is a rumor going around about Ernestine W. and Jimmy Morgan. Right, Ernestine? Why doesn’t Sharon R. give some of the boys a date? Could it be that you’re waiting just for Can B., Sharon? “When the cat’s away, the mice will play.” Just ask Sandy Skaggs. Ed Wright has finally asked Rose Cook for a date. Good luck, kids. Wonder why Janet Y. always wants to go to Tucker’s ? Norma Spence and George Ables make a real cute couple, don’t they? Wonder who Mar y Hodges is going to keep her eyes for? The one from Seco or Pound? Seems like Dora Stevens can’t make up her mind between Cincinnati and Beckley, W.Va. Wonder why? (The above articles from the December 1957 “Fleming Neon Hi Times” school newspaper.)