William B. Hall, former Principal of Fleming-Neon High School and a native of Deane, Letcher County, received his early schooling at the head of Rockhouse. At an early age he entered the Elk Horn Coal Company mines at Hemphill to earn money to further his education.

In 1928 he entered the sixth grade of the Berea Foundation School of Berea, Kentucky, and working his way, he remained there intermittently until 1938, when he received his AB degree in History and Political Science. Since 1938 he has taught continuously in the Letcher County Schools, and for the past twelve years he has been a member of the Fleming-Neon High School faculty — ten of which he served as principal.

In 1951, Mr. Hall received his Master’s Degree in School Administration at the University of Kentucky. He is a member of the Fleming Baptist Church, Past President of the Neon- Fleming Lions Club, a Mason, and a Shriner.

During Mr. Hall’s administration as Principal of the Fleming-Neon School, many improvements have been made. Among the first were: the renovation of the auditorium and the buying of stage curtains, painting of library and classrooms and the reorganization of the library and installation of shelving. Venetian blinds and a library charging desk have also been added to the library. Lockers for the convenience of students, fluorescent lighting, an intercommunication system, a mimeograph machine, a new movie projector, new typewriters, and an adding machine are other added features. 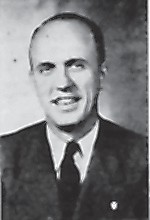 The curriculum has been greatly enriched for all by the addition of Home Economics, Music, Band, Physical Education and Speech and Dramatics.

Mr. Hall has been deeply interested in the students of Fleming-Neon and has given tirelessly of his time in their behalf. On leaving, he expresses his deep appreciation and highest regards to the students, faculty, and parents for their splendid cooperation.

The Halls regret leaving the good people of the Fleming- Neon vicinity in which they have lived, worked, and served for this number of years. However, they hope to give the Kingdom Come School the same type of service.

The Stuart Robinson Eagles put on a desperate fourth quarter drive in their Friday night challenge to Fleming-Neon’s right to participate in the 14th Region Tournament.

The drive failed, however, after Dorace Fields, who had led his teammates to within three points of the Pirates, fouled out with three and a half minutes remaining in the game.

Closest play in the game occurred in the first quarter, when the score was tied four times. At the end of this period, Fleming-Neon led 14-12.

The Pirates increased their lead in the second quarter, at the end of which the score read: Fleming-Neon 33, Stuart Robinson 28.

With three minutes of playing time left, the Eagles pulled to within three points of the Pirates 42-39 on two straight jump shots by Dorace Fields.

Free throws by Hawley and Williams pulled Fleming Neon back out in front by five points. A push shot by Dixon cut the lead back down to three points.

Led by Williams, who scored four points, and Bill Patrick, who hit two free throws, the Pirates shut out the Eagles for the remaining game, while hitting six points, to take a 50 -41 victory.

Fleming-Neon’s hard fighting Pirates spotted the Viper Hornets an elevenpoint lead in the first game of their 14th Regional quarterfinals game Thursday night and then rallied to take a fourteen-point lead and finally win by a 68-62 majority.

It was Viper all the way in the first quarter as Melton and Cornett hit two fielders each to give Coach Calhoun’s boys an 8-0 lead while the Pirates were trying to find the basket.

With two and a half minutes gone in the first quarter Patrick opened Fleming- Neon’s scoring with a free shot which Williams followed with a layup to cut the Viper lead to 8-3.

Viper, led by Branson and Back, jumped back out in front and by quarter time led by eleven points, 20-9.

The Hornets increased their lead to eleven points, 24-13, early in the second quarter and faltered as Fleming-Neon began to hit and control the boards.

Field goals by Hawley and Murphy with three minutes left in the second quarter, tied the score at 28-28. Branson hit a free throw to put Viper in front by one and Yonts connected with a long push shot to give Fleming-Neon its first lead on the game, 30-29.

The lead see-sawed until halftime, when Fleming- Neon took a one-point lead on Murphy’s spin shot.

Fleming- Neon came back strong in the third quarter and built up a 14 point (53-39) lead midway of the period. Viper cut the lead to 54-46 just before the period ended.

With only a few seconds left in the period, Branson hit a long push shot to pull Viper within six points of the Pirates. The whistle blew as the ball was in the air. Quarter score: Fleming-Neon 54, Viper 48.

The two teams fought on even terms throughout the fourth quarter, scoring fourteen points each.

Leading scorer for the night was Viper’s Branston, who hit for nine field goals and eight free throws for a 26-point total.

Murphy was high for Fleming-Neon with 15.