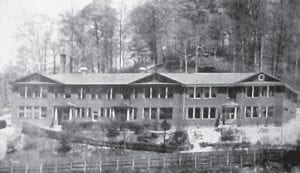 1951-52 This reporter regrets loss of Coach Goebel Ritter at

One of the first big stories this reporter had the pleasure of writing when he came to Letcher County in the summer of last year was that of the appointment of Goebel Ritter as basketball coach of the Fleming-Neon Pirates.

It was a pleasure to write of that appointment because this reporter had been running across the name of Goebel Ritter for many years and over many miles . . . from Mr. Ritter’s high school days in Richmond, to distant islands in the Pacific, where we both served with the Marine Corps in World War II, and back to Eastern State College at Richmond where Ritter became a well known performer in state and national basketball circles.

At the time of his appointment to the Fleming- Neon coaching job, Ritter had just completed his third season with the New York Knickerbockers, professional basketeers, who had reached the finals in league playoffs that year and it seemed strange to this writer that such an established star would accept a coaching job at a small school here in the mountains. The reason for Mr. Ritter’s coming to this county was later apparent to this writer when he told of Goebel’s 1947 marriage to the lovely Miss Pauline “Penny” Caudill, daughter of Judge James Caudill of Neon. 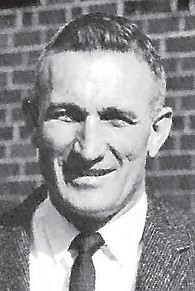 During his first and only year at the school, Ritter turned out a basketball team which compiled a good record of 14 wins and 9 defeats and advanced to the semi-finals of the 14th Regional Tournament. The team was composed mostly of seniors Goebel had inherited from Coach Darrel Jones, who moved from basketball mentor upon Ritter’s appearance at the school. By season’s end, Goebel had molded the team along his pattern of play and juniors and sophomores on that team gave indication they would be hard to handle in their senior year. 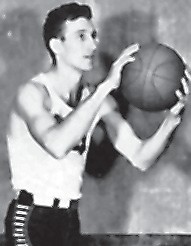 Now we learn that Goebel has accepted the position of head basketball coach at Hazard High School and we regret that loss, knowing that Letcher County will have a hard time replacing such a fine coach and man.

Goebel’s acceptance of the Hazard job wasn’t a surprise to most of us and we don’t feel hard at him for accepting the offer to coach the Bulldogs, for they are Ritter’s type of team. By his type of team, we mean big boys . . . rugged big boys who will rebound opponents off their feet and play a blazing hard shooting, hard running brand of ball. And of course, there’s Hazard’s big center, Quillen, who showed all state form in last year’s regional tournament. Quillen will definitely be the biggest threat in the 14th Region this year and he is the type of boy coaches like Ritter love to see in uniform.

And there’s Hazard’s spacious new field house, which offers a startling contrast to Fleming-Neon’s small gym. It must have cramped Goebel’s style to have been forced to handle his team in a gym where fans crowded in on both sides of him and his boys with some of those fans even standing on the playing floor’s edge, making the floor even smaller when what Goebel’s teams need is plenty of room in which to run.

This writer first became acquainted with the Goebel Ritter basketball story in 1943 when we both were stationed in Camp Elliot, California, awaiting shipment overseas. We were not personally acquainted but this writer, always interested in sports and Kentuckians, noted where a graduate of Madison High in Richmond, had turned in some good performances on the basketball team. Before we could become acquainted, Goebel shipped overseas. He went to New Caledonia and this person followed overseas three weeks later.

Our paths crossed again on Guadalcanal, where Goebel was starring with the Cage Squad of the 21st Marines of the Third Division but still we didn’t meet personally. During a brief stop at Saipan months later, this person again heard of Mr. Ritter, whose team had won the Third Division Basketball championship on nearby Guam. He also learned that Goebel had suffered a head wound on the sixth day of fighting on Guam. Later, Goebel was with his division in the invasion of Iwo Jima and on the sixth day of his fighting there he was hit by shrapnel in the hand and knee. He was taken to Saipan and then to Hawaii and on to the United States for hospitalization. That was in April 1945. He was discharged in August 1945 and returned to college at Eastern State that same month. He had completed two quarters at the college prior to the war.

Goebel starred with the Maroons during the 1945-46 season and quit the squad in the middle of the next season when he married. He returned to the team for the ’46-’48 season and was named all KIAC that year.

Ritter went from Eastern to the Knickerbockers and in summer vacation months returned to the college to work on his Master’s degree.

Goebel has performed under three of the big coaching names of our acquaintance. At Madison High, he performed under Ralph Carlisle, at Eastern, he played under Paul Mc- Brayer and he was tutored by Joe Lapchick at New York.