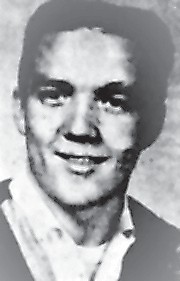 “Conserving our soil and water resources” by John Compton

As the farmer looks over his farm, he feels a sense of pride inside himself. He thinks of the effort he has put forth to prepare his land to produce the good crops. He thinks too of the time he has spent getting the fields to the high point of productivity they now possess. Yes, as the proud farmer looks at his farm from a grassy knoll, he sees some of the ways that his time and effort are paying dividends.

As he looks to his left, he sees several snow-white sheep grazing on the waving grass of the knoll. Farther down, he watches the tall and ripened wheat wave gently in the breeze.

His roving gaze, sweeping his cherished land, falls upon a small raccoon scampering out the edge of his corn patch. As he sees the little “coon” a smile broadens his face and he thinks about the game and wildlife that have become so numerous in the past three or four years.

He then looks to the hill, across the valley, but directly in front of him, and notices the walnuts, hickories, locusts, and the other young trees which he has planted. The previous owner made the hill look as if a lawn mower had been run across it, by continuous cutting of the trees without replacing them for timber in the future.

He remembers the badly eroded condition that the land, where the tall stately corn is standing, was in when he bought the farm.

The previous owner of the farm was unwise. He had always thought of conservation as something a few people talked of, but no one ever did anything about. If he had replaced the trees he had cut, it would have greatly reduced the amount of runoff of the water and thus prevented or decreased the erosion which became a direct result of this runoff.

The present farmer, a conservative one, still looking over his farm, now notices his crops of legumes, soon to be plowed under, to replace the nitrates which were taken from the soil by last year’s crops. He realizes that the continuous planting of the same crop in the same land will rob the soil of the minerals which are needed to ensure the abundant growth of his crops. He knows too, that while crops are taking some minerals out of the soil, they are adding other minerals which other crops must have. For this reason, he changes the location of his crops from time to time. This crop rotation is one of the most common and most important methods of soil conservation.

As the proud farmer sees his well-planned farm he notices some of the many things which have come about as the result of a farm set up with a conservation plan in mind. He probably does not think of the many indirect ways it benefits people other than himself. Conservation has done even more than protect and improve his land. It has helped lower his cost of producing these products and, in ad-

JOHN COMPTON dition to giving him extra profits, it has also reduced the cost of food and clothing for the people who live in the towns and cities.

Soil Conservation not only benefits people in general by helping to produce goods cheaper but also checks prolonged dryness which affects the earth and prevents the growth of plants. Perhaps most important of all, it helps provide cities and towns with a cheaper and more dependable supply of water. It helps keep streams, reservoirs, and harbors clean.

The cleaner water in turn is important to valuable aquatic life. It lessens the damages to the feeding and breeding places of fish, crabs, oysters, and all other sorts of water life both as a source of food and recreation. Soil conservation, either directly or indirectly, helps to increase the amount of beneficial wildlife.

Although, like this farmer, many of the farmers all over the country do not realize it they are of major importance to everyone. Whether or not they realize it, the fact is that these farmers play a vital part in our well being as a nation. Perhaps the reason they do not sense their importance is due to our economic structure and because they are engrossed by their own benefits. This is not especially true of the farmers who have joined their local conservation districts, for they, perhaps better than anyone, know the importance of soil conservation.

Conservation farmers feel that it is their duty to try to get other farmers who do not participate in the conservation program, to do so. They know that productive land is a valuable resource and is essential to the wellbeing of any nation and no matter how much it has, it does not have any to spare.

These conservative farmers feel, most of all, that conservation’s biggest contribution is a cleaner, stronger, and a more beautiful country inhabited by stronger, wiser and more cooperative citizens.

Patricia Lee May gave the salutatory address, and John M. Compton gave the valedictory address. The Rev. J.C. Harris, pastor of the Neon and Seco Methodist churches, gave the invocation and benediction.

Coach Rex Chaney’s Fleming Pirates added two more victims to their list in capturing the Wallins Invitational Tournament at Wallins Friday and Saturday night. Hall and Wallins became the sixth and seventh teams to fall before the precision attack of the Pirates.

In Friday night’s first round action Fleming disposed of a good Hall “Five” 66 to 59 with Ross Chney getting 19 points for the Pirates. Hall’s Shepherd however, led all scorers with 20 points.

Fleming took the lead early in the ball game and was never headed although it was anybody’s game until the final seconds when the Pirates went in front by seven.

Chaney and Baker All- Tournament

In the finals Saturday night, Fleming had an easier go of it in whipping the host team Wallins, 66 to 49. The Pirates were never seriously threatened as Hall and Chaney registered 21 and 14 points respectively. Chaney put on quite an exhibition of dribbling throughout the second half. Wallins’ Jarvis led all scorers with 22.

The double-shift is necessary to provide schooling for students from the Fleming-Neon High School, which was destroyed by fire last Tuesday night.

Grade school pupils will be in class from 8 a.m. until 12:30 p.m. Monday through Saturday.

High school students will attend classes from 12:30 p.m. until 6 p.m. Monday through Friday.

Superintendent Hall said Saturday classes are necessary for grade school pupils to get in the required amount of time to complete their work.

Lunch will be served at the Fleming-Neon lunchroom from 10:30 a.m. to 12:30 p.m. daily. Hall said he did not know yet how many grade school pupils would stay for lunch or how many from the high school would come to lunch.