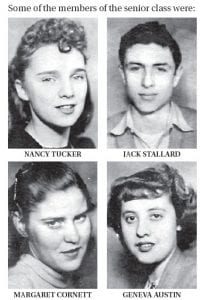 Suddenly their first year on the hill was completed and they were on vacation, eager to see September arrive.

Approximately 70 people more experienced in the world of learning enrolled as the sophomore class of 45-46. Many were curious and eager to find out if all they had heard about Enlow’s algebra room was true. All of the rumors heard were verified and it was a bruised and battered bunch of sophomores who returned home to tell their parents the horrors of room 9.

In all they had a successful year, and a good time on the hill. Their work in the classrooms, football and basketball, and social life was recognized by everyone. From then on, they were marked as a class to watch and much was expected from them. At the end of their second year on the hill it was a happy bunch that had taken another step forward on their journey to the top.

Thirty-one people enrolled in the Senior Class of 1947-48. They all knew that this was the most important year of the four and it would take hard work before they could get that piece of paper that would mean so much to them throughout their life, also this year might determine their life work. So, with these things in mind they settled down to work harder than ever before. They were also anticipating Washington, D.C. and before them lay the huge task of raising the money but as they had done many times before they proved they could produce when the chips were down. On Wednesday, April 14, they happily boarded the school bus, which took them to Pikeville, where they boarded the C&O train which would take them on to the Nation’s capital.

The following Sunday, the tired but happy bunch returned to their respective homes to tell of the wonders of the “Cherry Blossom” City. The trip was such a great success that Mrs. Hill, the class sponsor, and Mr. Reasor, co-sponsor, and the class have planned a trip to New York City during the latter part of May. These sponsors have done a marvelous job in helping the class raise money and spend it.

On May 21, 31 seniors will dress up in their caps and gowns, and with a brain many times more cultured than it was four years ago will take part in the graduation exercise. Of course, the boys will have new suits, and the girls new dresses, but if you want to take a look at them you will have to wait until the caps and gowns are off. Out of the 31, many have realized they need more education to qualify them to take their places in the local, nations and world communities. Many will be coaches, dentists, doctors, preachers, nurses and many other things and as they have already proved many times before everyone is sure they will all succeed in anything they undertake.

On the hill stands Fleming High School ‘Neath fair skies of blue, May she ever stand so proudly glorious to view

Fleming we will always honor, and thy name adore, dearest school in all the southland, Fleming forever more.

Chorus: Hail to thee, our Alma Mater, thy ideals uphold, ever be true and loyal lovers, of the purple and gold.

Recuperating from a 19-0 defeat April 23, the Fleming Pirates hit back at the Yellow Jackets in their second encounter, April 29 on the Pirates’ gridiron.

The Pirates won the toss and selected to receive. Each of the backs alternated in carrying the ball down the field until they were forced to punt.

Most of the first half was played in the middle of the field. The Pirates drove off attack after attack as they did a brilliant job on their pass defense.

The first half went scoreless as the Jackets took no chances.

The Pirates got a bad break at the kickoff of the second half, as the Yellow Jackets covered a Pirate fumble.

Late in the third quarter, as the Yellow Jackets attempted to pass, Bobby Bentley, half blocked a pass knocking it into Cornett’s arms. Cornett covered the 40 yards, untouched for the Pirate score. The try for extra point was good with a pass to “Karo” as the Pirates pulled out front 7-0.

The Jackets came back stronger in the fourth quarter and stung the Pirates as Gail Fields drove over from the two-yard line for a Jacket touchdown. The score was knotted 7-7 as the Jackets drove over center for the extra point.

The fighting Pirates tried desperately to get in scoring range but the final whistle blew with the Yellow Jackets in possession of the ball.

Members of the high school faculty

The order of camp: Invocation Rev. Isascs; Gather ‘Round our gypsy campfire (Junior toast of welcome) by Eulice Stallard.

Your Camp of caravan shares (Senior response of thanks)-Leroy Fulton.

Skies are blue for gypsies Songs.

(The above articles from the May 1948 Fleming High Times Newspaper.)