The Fleming-Neon Athletic Banquet of 1956 was held at 7:30, May 8, in the lunchroom of the Fleming- Neon Grade School. A large crowd of over two hundred was present. Fleming-Neon was honored by the presence of Coach Blanton Collier, Head Coach of the University of Kentucky. Coach Collier’s inspiring speech was one that will long be remembered by those present at the banquet.

The following program was presented after a delicious meal was served with the help of the Home Economics Department. 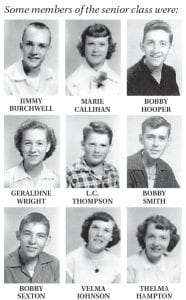 Come now, let’s open the treasure chest of the Old Pirate and see what doubloons and pieces of gold we can bring to light!

Highlights of the week were the presentation of letters, sweaters, and awards to the boys who had earned them in football and basketball, and to the girls who served as cheerleaders. The presentations were made by Coach David Hurst, Coach John Morgan, and Coach P.M. Armstrong in the auditorium on Tuesday, April 10. Boys lettering in both football and basketball were: Harry Johnson, Leon Sergent, Tyrone Bentley, J.P. Graham. Boys lettering in football were: Jesse Carter, Leonard Hampton, Donald Meade, Charles Isaacs, Can Bentley, Donnie Browning, Gary Bentley, James Hill, Tommy Pass, Mgr. Walter Thomas, Jr. Roger Dishman, Carl Swanager, Don Skaggs, Tommy Shehee, Mgr.

Coach Armstrong then presented the “Runnersup” Trophy to Principal Holbrook, with the promise to bring the companion piece “Champions” to him next year.