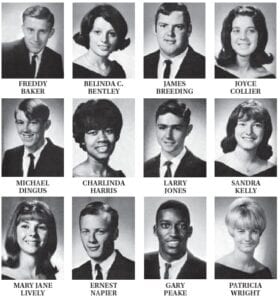 Mr. Honeycutt’s speech class is giving a Christmas Pageant as the Christmas program December 20. The pageant “Star Light Star Bright”, concerns the connotations that different people have upon visualizing the Christmas star. The Star is seen through the eyes of a child, Doris Johnson; a youth, Gordon Johnson; and an adult, Linda Fields. The Choral Choir consists of the other members of the Speech Class. A central reader, Brice Hill, narrates the story.

Miss Griffith’s Choir Class will assist the Speech Class in this pageant. Two songs that the Chorus will be singing are: “The Christmas Song,” and “It’s Beginning to Look a Lot Like Christmas”.

The Band will also participate in the pageant, but their exact part has not yet been decided.

Some of the worst enemies were once our best friends that were spoken to as only friends should. Kris Bentley.

The application of knowledge guided by experience and based on sound judgment will produce “wisdom.”-Willie Johnson.

I Heard It Through the Grapevine-Brenda to Corey T.

It Tears Me Up-Linda E. to Earl.

Never My Love-Bonnie W. To Randall; Beth to Someone Special; Jimmy to Celeste

We Can Work It Out- Mary Jane Lively to Gary F.

Baby Light My Fire-Roberta C. to Someone Special

I’m Yours-Kaye C. to Someone Special

It Takes Two-Jesse to Anna Mae.

Everlasting Love-Brenda B. to Alfred S.

Baby You’re My Heart’s Desire-Connie to Bobby; Iva to Dennis; Rose to Bug; Debbie to Someone Special; Rosemary to Brice.

The above articles from the 1968 Yearbook and Pirate Eye Newspapers