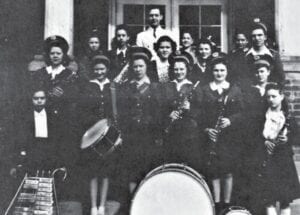 The play, “Swing Out”, will be presented in the auditorium of the graded school building for the benefit of the Whitesburg Methodist Church on Thursday and Friday, March 13 and 14. This is a hilarious three-act comedy and is directed by Miss Hillerbrick, representative of the National Producing Company of Kansas City.

The action throughout the play takes place in the garden of the Kissler Estate. Betty Kissler, only daughter of the Kissler’s returns home from New York finishing school. She brings with her a Frenchman by the name of Pierre Gaston. Mrs. Kissler is going to hold a charity entertainment and is just thrilled to death because now she has such a distinguished house guest to introduce at her show. John Arthurs, who handles all the advertising for Mrs. Kissler concerning his Kant Kum Off Lipstick, is very much in love with Betty. Now that she has fallen for the Frenchman, he is afraid he’s lost her. Rita Phillips, a widow and neighbor of the Kisslers, thinks she can help John get Betty by having him fall in love with another girl. Then there’s a chance for her to get Pierre. John thinks Pierre is a crook. Does John get Betty? Who’s the girl John pretends he’s in love with? Is Pierre Gaston a crook and a thief?

The lovely choruses are of especial appeal and include a military number. The music is “Remember Pearl Harbor” with the girls doing a tap-dance and military drill. The next chorus is the French Maids wearing pink and gray ballet costumes and singing and dancing a dainty routine. The “Swing Out” girls wearing dress suits in black and white with top hots sing and dance to the theme song “Swing Out”, which is one of the copywritten songs in this elegant production. To complete the choruses are the Texas cowgirls dressed in typical Texas regalia singing “Deep in the Heart of Texas”.

The program begins with the playing of “The Star Spangled Banner” and other patriotic songs. Announcements will then be made of the cast and company with the acknowledgment of the many firms extending gracious cooperation in the production. The play will continue and between the second and third act on Thursday, June 4, the French Maids will circulate through the audience selling tickets for the $25 War Bond to be given away at the showing on Friday, June 5. Singing “God Bless America” by the entire cast and company will be the Grand Finale to the best evening’s entertainment you can enjoy, for not only will you be pleased with the performance of the outstanding cast and choruses but you will be patronizing a most worthwhile cause.

On Friday night, June 5, the program will be the same and between the second and third acts the winning ticket will be drawn and the prize of a $25 War Bond will be presented on stage to the winner. A child from the audience and then blindfolded will select the tickets which will be called by a gentleman in the audience. Mr. James M. Caudill, the Postmaster will assist in the presentation of the award.