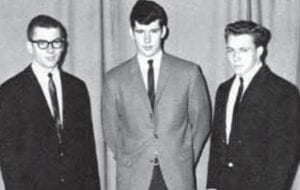 Fleming-Neon, fresh from a big win over mighty Hazard, defeated Paintsville by a 19-point margin in a game they had to win in order to stay alive for a chance to go to state.

The Pirates met M.C. Napier on their own ground and defeated them 55 to 6. M.C. Napier was no match for the hard-hitting Pirates.

The game with Wheelwright proved to be much more difficult for the Pirates. The Pirates trailed 7-0 at half time but came back to defeat their opponent 27 to 7.

The Wheelwright game ended the regular season for the Pirates, but in order to go to state the Pirates had to defeat two more teams. Before a very large crowd the Pirates met the Lynch Bulldogs on home territory at Fleming. It was a grim struggle in which both teams displayed much courage and skill, but with the final score 15 to 3 it appeared the Bulldogs had met their match.

With their goal finally in sight, the Pirates in a 13-13 tie with the Erlanger Lloyd

We wish to congratulate Johnny Greene, right guard, and Harold Bolling, right tackle, who made first team on the all-conference football team. Also, Roy Yonts, quarterback, who made second team.