The following article is from the first edition of Sportsvine, Letcher County’s First Sports Magazine, November 1991, edited by John Bastolla.

On a pleasant September evening in 1957, the Fleming-Neon football team took the field for the first time under the direction of rookie head coach Jack R. Hall. Dwight D. Eisenhower was in the Oval Office. The Bridge on the River Kwai was the motion picture of the year, and a young kid by the name of Elvis Presley was beginning to make a name for himself in the world of music.

Everyone in the busy little town of Neon knew that Jack R. Hall had been a great football player, one of the best to ever wear the purple and gold, and on this exciting evening they would get their first look at Jack R. Hall as a head football coach.

It turned out to be a very impressive view as Coach Hall’s aggressive Pirates nailed the M.C. Napier Navajos, 34-4. The Pirates went on to record an 8-2 season and the successful coaching career of Jack Hall was on its way. 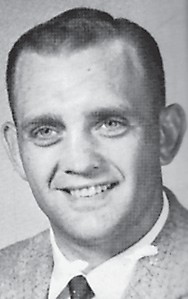 As the star quarterback for the Pirates football team from 1948-1952, Coach Hall led the Pirates to many exciting moments and victories. It was during his senior season that he was named to the Wigman Wiseman All America team and the Kentucky High School First Team All-State Squad. In 1950 he was chosen as honorable mention All- State and in 1950 and ’51 he was named to the prestigious All-Big Sandy Conference Team. However, football was not the only sport Coach Hall excelled in. He was an All-District basketball performer in 1950-51 and was a member of the All-District Baseball team in 1951 and ’52.

After graduating from Fleming-Neon High School in 1952, Coach Hall received a football scholarship from the University of South Carolina where he played fullback and linebacker as a freshman. The following year he transferred to the University of Wyoming and lettered three years as the Cowboys’ offensive center and defensive middle linebacker. During his senior year Coach Hall helped lead Wyoming to a 20-14 victory over Texas Tech in the Sun Bowl.

In the spring of 1956, as a member of the Wyoming baseball team, Coach Hall participated in the N.C.A.A. College World Series leading the Cowboys to a third-place finish in the nation.

The following autumn Coach Hall returned to his alma mater as a teacher and assistant football coach under the highly regarded Dave Hurst. He remained at Fleming-Neon for six years. During those six years he was chosen Big Sandy Coach of the Year in 1958 and ’59.

Coach Hall moved to Elkhorn City in 1962 where he took over a Cougar football team that had won only one game the previous year. Two years after taking over this almost hopeless situation, Coach Hall led his Cougars to the 1964 Kentucky Class A State Championship. For this incredible accomplishment he was named by the Lexington Herald-Leader as Kentucky High School Football Coach of the Year.

In 1965 Coach Hall and his family moved to Richmond to coach at Madison High and work on his master’s degree at Eastern Kentucky University. 1n 1967 he returned to Elkhorn City where he coached for three years before accepting the head coaching position at Kings Mills High School outside Cincinnati, Oh. Kings Mills had won only one football game in its 13 years of competition. During his four years there Coach Hall posted three winning seasons and won two Fort Ancient Valley Conference championships. For his remarkable job he was chosen Fort Ancient Coach of the Year in 1971 and ’73 and voted into the Kings Mills Hall of Fame in 1991.

The year 1978 saw Coach Hall return to Elkhorn City once more where he again led the Cougar football squad for seven more years. In 1985 he left Elkhorn City to take over the reins at Betsy Layne High School. After three years at the Floyd County School, and the first and only winning season, Coach Hall returned to where it all began 30 years earlier.

Again, as it was 30 years before, the people of Fleming Neon returned to watch Coach Hall’s magic as he took over a Pirate program that had not posted a winning season in seven years and guided the purple and gold to a 9-3 record and return to the playoffs.