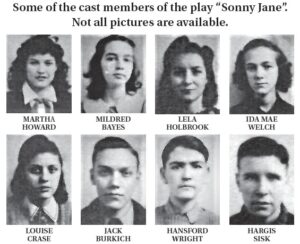 The seniors are presenting their play, “Sonny Jane” March 7, afternoon and evening, admission will be 25 and 40 cents. The characters are:

6. Ruby Wade (another newspaper woman who tries to run Sonny Jane out of business) by Louise Crase.

9. Joe Martin (a young hired man, who has hopes of becoming metropolitan) by Hansford Wright.

The seniors recently presented 125 songbooks to the school in addition to the venetian blinds.

The improvements on the library and study hall have made them a very pleasant place in which to study.

The first exciting football game of the season was that of Fleming vs. Whitesburg.

It was a fair and square fight to the finish.

There were also two substitutes entered, they were: Hargis Houston and Clifford Potter.

Fleming’s new captain this year is Elbert Richardson. The most yardage gained during the game was by Homer Kuhl of Fleming.

Both teams were in fairly good shape after being coached these past weeks by Holbrook and Enlow of Fleming and Jody Adams of Whitesburg. These swell coaches with the cooperation of the boys on the Fleming team, the cheering squad led on their capable leaders, Helen Tucker and Grace Hall, all added to victory for Fleming in the end.

The Fleming P.T.A. met Tuesday night of last week at the grade school building with Mrs. Chilton Hazelett, presiding. Plans were discussed for the Hallowe’en Carnival at the high school building, Friday night, Oct. 29. The P.T.A. is sponsoring the carnival and the teachers and parents are looking forward to a success so please come to the carnival Friday night and let’s have fun with our children.

(The above articles from the Fleming High Yearbook and Mountain Eagles)