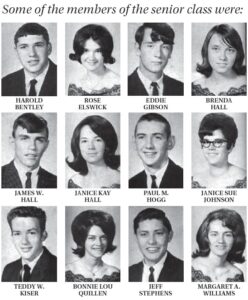 Co-Ed-Y-Club: The Co- Ed-Y Club has really been busy. They have sold cookbooks and are going to order Co-Ed Pins. They also expect to meet with the State Organization.

Bible Club: The Bible Club had a guest speaker at their last meeting, Mr. Murray from Main Street Church of God. They will feature a display on the bulletin board for Easter.

Future Teachers Club: The Future Teachers are still working on the paper and hope to visit a college in the spring. They also ordered and received their club pins. They plan on a spring picnic.

Beta Club: The Beta Club plans to appear on Club Quiz in the spring. They will choose their three teammates soon

Sports News: In our last few football games ending the season, the Pirates went to Hazard where they played the Hazard “Bulldogs”. This was expected to be one of the Pirates’ hardest games. But the “Bulldogs” had lost their bit or something. The Pirates came home with the victory, defeating them by a score of 68 to 14.

The next weekend the Pirates went to Paintsville where they were to play the Paintsville Tigers. This was to be the game of the season for both teams. Neither team had lost a game the whole season and now both met on the same field to fight the battle. This was the game which determined the Class A Championship. The Pirates started out with the first six points, but the Tigers came back with one to match. These two teams were really a good match. The Tigers outfought the Pirates, defeating them by a heartbreaking score of 13 to 12. One of the Pirates was hurt in the first quarter of the game. Maybe this could have been a factor causing the difference between winning and losing, but we’ll never know for sure.

Next half, the Pirates scored, but missed their extra point, making the score 12-7. Some plays later, Grundy scored. That was the way the game ended, we lost by a heartbreaking score of 13-12.

What’s going on in our school?

The students at Fleming Neon especially seniors, are sorry that Mrs. Webb is ill and is at present in the Whitesburg Hospital. Her classes have sent her flowers and get-well cards. The staff of the Pirate Eye extends a special GETWELL wish to Mrs. Webb.

Mr. Reasor was away two days during the week to attend a Principal’s meeting. But Mr. Watts kept things in line during Mr. Reasor’s absence last week.

Congratulations to Mr. Lucas and his new car. Try to keep it in one piece, Mr. Lucas, if you can.