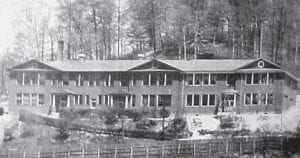 Richmond and Paintsville will compete in the Big Sandy Conference this year.

The band also attended the Paintsville game and did an exceptionally good job considering the 22 minutes we worked the show up. This was due to the condition of the field last week, but with a director as wonderful as our Mr. Arrington, we could have done it in much less time. We are to perform at the Fleming-Neon, Leslie County game Saturday Night. If you come to the game we will entertain you royally. Ernest L. Hunter, Jr. 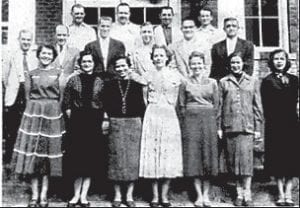 The annual Halloween Carnival of the Fleming- Neon School PTA was a huge success. It was held Friday evening Oct. 26. Games, variety shows, food sales and etc. were held in the grade school building and the beautiful Coronation Ceremony was in the gymnasium. Setting for the coronation was a winter Woodland Scene in pink and white and was complemented by a background of pine boughs. Lovely Queen Carol James, King Harry Phillips, Prince Gary Pack and Darling little Princess Susan Banks composed the Royal Family.

The girl attendants were in pink and white formals and carried nosegays of pink and white carnations, each of these girls was escorted by a handsome young man.

The six little flower girls looked like little dolls, they were dressed in pink organdy, party dresses and carried white baskets of pink and white flowers. Miss Redda Reasor and all her wonderful assistants deserve much credit for the splendid job they did. 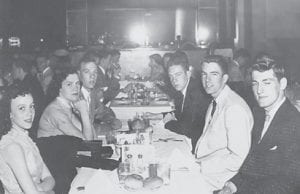 Clockwise from left are Alice Richardson, Pat Bentley, Raymond Phillips, Don Meade, Dave Spence and Billy Jo Hall. This picture taken at the Lotus Restaurant on May 2, 1957 during the senior trip. It is from a Facebook posting by Dave Spence.

Fleming defeated Cumberland 26-7 over at Benham before a large crowd.

Cumberland scored the first touchdown on a long run. Their try for an extra point was good. Fleming scored in the second quar- ter and tied it up 7-7 at the half.

Both teams came back onto the field determined to win. Fleming kicked off and it was returned to the 40-yard line. Cumberland tried a pass on the 3rd play and it was intercepted by Swanger.

From there the Pirates scored. The extra was no good and it stood 13-7.

Fleming then went wild and scored 3 more touchdowns but one of them was called back. At the end of the game it was 26-7, favoring Fleming. The boys who played in this game will receive patches to go on their jackets. They will have “First Annual Coal Bowl Winners” on them.

The touchdowns for the Pirates were as follows: Hill, Skaggs, and Sergent, one.

Friday Nov. 9, there was a parade here in Neon concerning the Coal Bowl. Our band led the parade with all the Queen Candidates and the Benham band present. Everyone seems to have showed up for the parade. The streets were packed all the way through town.

Then Saturday at 9:30 a huge parade originated in Lynch when the Cumberland Band led the parade with us next in line. These bands were present: Fleming-Neon, Cumberland, Benham, Lynch, Harlan, Pennington and Appalachia. There were several beautiful floats, which the beautiful Queen candidates rode in the huge parade. Our Queen Candidate was Joyce Nelson. The winner was the young lady from Cumberland High School.

At halftime each band did a brief show. We did a very good precision show. The Fleming, Cumberland and Pennington bands formed a mass band and played Thundera, and Salutation while the Cumberland Drum Majorette and I did a twirling exhibition. Cumberland gave a dance after the game for all the guest bands. Our band attended and each and every one had a good time. We wish to extend our best wishes to the Cumberland Band and team and hope we can get together again real soon.

Every band present was just wonderful, everyone was considerate of everyone, the parade, dance, and game were a huge success. Fleming only wishes everyone we play were as good sports as Cumberland Band and team. We regret to see the end of the football season pass even though we have had a wonderful season, but several of us will not be here next year and that is sad.

We look forward to playing in the Coal Bowl again someday. It was a perfect occasion and we wish to thank everyone who made it all possible.