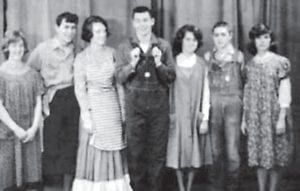 A HILLBILLY CHRISTMAS . The Speech Class of 1966 is to present on Dec. 21, 1965, two short plays and a choral reading. The two plays include “A Hillbilly Christmas Carol,” a Christmas comedy, and “School Bus Romance,” which is an untypical ride in a school bus. The characters are: “A Hillbilly Christmas Carol”-Joshua-Roy Yonts; Widow Minkly- Connie Meade; Miram Minkly-Ray Howard; Cora Belle-Iva Baker; Lizzie Ann-Jennifer Castle; Minnie Su-Lavada Fulton; Ossie-Larry Jones.

The 1965-66 Fleming- Neon Grade and High School Honor Banquet was given May 26, 1966 in the Fleming-Neon Grade School Building. Serving as Master of Ceremonies was Sam Clinton Webb. The ceremony was opened by invocation given by Mr. Johnny Holbrook and then a marvelous dinner was served, prepared by the Homemakers Club of Neon. During dinner, Robbie Pigg entertained the guest by playing several pieces on the organ.

After dinner Lillian Webb read several inspiring poems, which were directed to the students honored.

Following this, the guest speaker, Mr. James Engle, Administrator of the Office of Student Financial Aid at the University of Kentucky was introduced. His subject was, “Quality That Leads to a Successful Future.” In his speech, he spoke of ambition, aspiration, determination, wholesome attitude, courage, initiative, intellectual curiosity and thirst of knowledge as being these qualities.

After the main speech, Loretta Banks of the Homemakers Club presented the Science Award and the Homemakers Award. Eleven children tied so a test was given to see who should receive the award. Two boys tied, Robert Meade and Wayne Bentley. Each is to receive jackets. An award was also given to the Senior who had taken four units of Science and had made the highest grades. This award, which was a check for $25 went to Stanley Bentley.

Concluding the Banquet, two additional awards were presented and these went to the two seniors who had been present at all four honor banquets. These were Bonnie J. Isaac and Brenda McFall.

The above article from the June 2, 1966 Letcher Co. Community Press.

The choral reading will have a scriptural text and will be presented by the entire class.

A group from Alice Lloyd College will also make a special presentation during Christmas week.

Who is Bobby Fisher? I’ll bet Linda Craft could tell us. Wonder why Brenda A. isn’t wearing Paul’s class ring anymore? Have you broken up or are you not wearing it to keep us guessing? We hear Freddie Hall is receiving letters from a freshman girl. Wonder who he could be? What happened to Dorothy Hall’s class ring? Could Kris B. have it? Tell us, Dot. What’s this we hear about the students in Miss McIntyre’s room not going to home room? Did Mr. Reasor have the right solution, kids? You bet he did. Who is the boy from WHS Iris Reynolds is after? Could it be Larry M? What Senior girl was sitting in psychology writing Danny M. a letter? Could it be D.W.? Whose head looks like a Shetland pony? Could it by Ronnie S.? Is it true that S.M. is struck on L.W.? I know a girl that won’t like this, Susie. What’s this we hear about Mr. Evanoff ’s new style of typing? Could he use the “peck” system? Why is Linda Adams always getting shot out-of-the saddle? Someone ought to teach him to duck!!

The above article from the December 1965 “Pirate Eye” school newspaper.

Some of the members of the senior class

The above article from the 1966 Fleming-Neon Yearbook