Major Caudill received the award for heroism in combat in Vietnam on April 20 while serving as an observation pilot on a reconnaissance mission. The Army stated: “Receiving a message that the Viet Cong were attacking a ship on the Long Tau River, Major Caudill flew to the area and spotted the enemy positions. He attacked the Viet Cong with rocket fire and came under heavy return fire.

“Throughout the action he was under fire and his aircraft received seven hits. However, his aggressive actions forced the insurgents to abandon their position.” 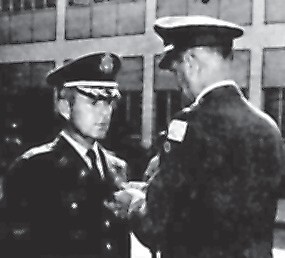 Major Caudill is presently a student at the Command and General Staff College. He entered active duty in 1954 and was last stationed in Vietnam. He holds the Army Commendation Medal, the Air Medal, and the Vietnamese Cross of Gallantry.

The major, a 1949 graduate of Fleming-Neon High School, received his commission through the Reserve Officers’ Training Corps program at Eastern Kentucky University, Richmond, Ky., where he received his B.A. degree in 1954.

Sat., Feb. 19, the Jenkins Cavaliers lost a hard-fought contest to the Fleming Pirates on the Fleming floor by a score of 47 to 54. High point man for Fleming was B. Tucker, a forward, who stacked up 21 points. Burns, a guard, was close behind him with 19 points. Anderson, a forward, led the scoring for the losers with 13 points.

How can anyone help noticing the seniors’ hands since they have received their sparkling new class rings? The rings are gold with an “F” on the front and “1949” on the sides with black on the background. Most of the rings ordered were boy’s size, but a few were college size.

If you become tired of seeing class rings, just remember, some day you’ll be a proud senior. The Fleming Hi seniors are indeed proud of their rings and all they mean to them.

The Fleming Pirates defeated the Dorton basketball team last Friday by a score of 31 to 25. High point man for Fleming was Burns, guard, with 12 points. Coach Labe Gregory’s boys journey to McDowell Saturday night for a tilt there. The Pirates’ record for the season so far is 10 losses and 7 wins.

The Fleming Pirates upset the Kingdom Come team on the Fleming floor Friday night, Feb. 25. The score was 45 to 35.

High point man for Kingdom Come was B. Isom with 12 points.

Fleming boys learn state government by taking part in it

Those from Fleming High attending were Charles Stallard, who went as a State Senator, Jerry Tucker and Jimmy Preston, State Representatives, and Eulice Stallard, press representative. The Rev. John Isaacs, teacher at Fleming, accompanied the group.

Two hundred and thirty-one delegates from 29 Kentucky cities and communities were present. The purpose of the Youth Assembly was to teach the processes of state government to Kentucky high school students. The delegates stayed at the Capitol Hotel and the Southern Hotel in Frankfort and held their meeting in the capital building.

The delegates were present in the stormy session of the General Assembly when two representatives resigned in protest over Gov. Clements’s assessment bill. After the legislature adjourned the Youth Assembly met. The Fleming delegates introduced four bills, none of which were passed. The bills passed by the Youth Assembly will later go before the Kentucky General Assembly. Most of these bills concern education in Kentucky.

(The above articles from 1949 Mountain Eagles.)