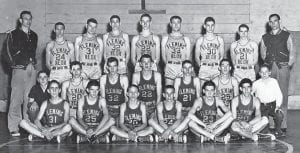 The annual carnival sponsored by the P.T.A. with E.L. Burklow as chairman was a big success. As the doors opened Tuesday evening at 7 p.m., many people rushed in to the style show, the variety show, and other features of interest. Bingo was enjoyed and food, candies and popcorn were served.

Over $1,500 was raised at the carnival. The money will be used for materials and equipment in the school.

Fleming-Neon is proud to have as their new band director Mr. Bertram Haigh, of New York. Mr. Haigh comes to us highly recommended and is making a good start towards getting our band in order again. The band hopes to play at the Hazard game Saturday, Nov. 10.

We are welcoming to our school Mr. Bradley Breeding who is now teaching English. Mr. Breeding, who is a graduate of Morehead State College, formerly taught at Seco.

Nov. 12-17 is American Education Week and National Book Week. The P.T.A. program will be centered around National Book Week. In observance of American Education Week, Fleming-Neon High is having open house on Thursday, Nov. 15. On that day, all parents and interested people are urged to visit our school. Refreshments will be served by the Home Ec. Department

Pikeville had previously beaten some of the best teams in the Big Sandy Conference and was fresh from a win over the powerful Prestonsburg Black Kats.

The Panthers got off to a quick six-point lead when quarterback Phillips carried over for a touchdown early in the first quarter. Fleming moved ahead near the end of the quarter when halfback Wright ran 30 yards for the Pirates’ first tally. The try for the point was good and the Pirates led 7-6.

Pikeville scored twice in the 2nd quarter and one extra point to move ahead 19-7. Fleming’s left tackle Little picked up a fumble in the air on the 10-yard line in the second quarter and went over for Fleming’s second touchdown. The first half ended with Pikeville leading19-13.

Pikeville widened its lead in the 3rd quarter with a touchdown. The try for the extra point was no good and the score was Pikeville 25 and Fleming-Neon 13. The big lead was cut down in the same quarter when Wright scored for Fleming from the five-yard line. The try for point was good — Pikeville 25, Fleming 20.

The Pirates shut out the Panthers in the 4th quarter and moved ahead when Wright went all the way from the 50-yard line. The extra point was good and Fleming led 27-25.

Playing outstanding games for the Pirates were right tackle Cornett and center Burns.