To those who have so willingly helped those in need, created an atmosphere of friendliness, and participated in making Fleming-Neon a wonderful school, we proudly dedicate this Buccaneer to Mr. and Mrs. Ralph Roberts. 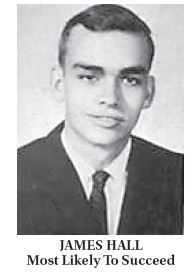 The Junior-Senior prom was held at Fleming-Neon High School. Music was by “The Darkest Knights.” Sponsors were Mrs. Lillian Webb, Mrs. Ruby Adams, Mr. Honeycutt and Mr. Vance. The kids say it was a complete success.

At stake will be the Second District championship of Class A’s Fourth Region.

Fleming-Neon takes to Paintsville its record of eight straight wins — including the 67-14 beating it gave the Hazard Bulldogs Friday. It was the worst defeat in Hazard’s history, and clearly marked the end of Hazard’s long time domination of the football scene in this area.

Fleming-Neon has been picked to win the tussle with Paintsville.

No less an authority than Pikeville Coach Gene Davis said this week that “nobody in his right mind could pick against Fleming-Neon: They’re big, they’re strong, they’re mean, they’re old, they’re tough . . . and they really like to hit you.”

Fleming-Neon proved the wisdom of the Pikeville coach by breaking all kinds of records in its defeat of Hazard, in which Fleming- Neon accumulated a staggering total of 614 offensive yards, to 284 for Hazard.

Long Binh, Vietnam: Howard V. Breeding, 22, son of Mr. and Mrs. Earl Breeding, Seco, was promoted to Army specialist fourth class Sept. 15 in Vietnam, where he is serving with the 553d Engineer Detachment.

A construction engineer in the detachment stationed near Long Binh, Spec. Breeding entered on active duty in July, 1965, and was stationed at Ft. Leonard Wood, Mo., before his arrival overseas last May.

He is a 1962 graduate of Fleming-Neon High School.

Senior Hall of Fame is a method of recognizing outstanding seniors. These students are selected by the senior class to represent the ones they feel are most cooperative, most likely to succeed, the most popular, and the most studious. The faculty selects the senior boy and girl considered the most courteous on the basis of their attitude toward and their cooperation with their fellow students, their instructors, and the community in which they live.