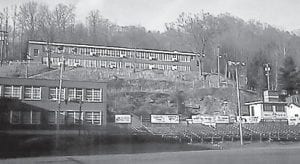 Irene Potter: Member of the Future Homemakers of America, Girls’ Rifle and the Pep Club.

Jack Hall’s Fleming Pirates moved up into second place in the Eastern Kentucky Mountain Conference by trouncing Elkhorn City 41 to 13 and by virtue of Pikeville’s 14 to 13 loss to Prestonsburg.

Hazard had more trouble than expected with Belfry, but finally won out 26 to 7 after holding only a seven to nothing halftime margin.

M.C. Napier dropped Wheelwright 19 to 14 for their third win. Jenkins dropped a seven-to-nothing decision to Clintwood, and Whitesburg was beaten by the undefeated Lynch Bulldogs 3-0.

The Fleming-Neon P.T.A. met Monday night. Guest speaker was Miss Cleo Stamper. She talked on the revision of the State Constitution. The banner and treat for the room was won by Mrs. Mattie Lou Anderson’s third grade. Jack Hall’s homeroom won in the high school.

Plans for the show were made at a meeting of the organization Nov. 21.

The show will feature talent from the school. Parents will have homemade candy and other items for sale at the show.

Coffee and cake were served to those attending the PTA meeting. Mrs. Powell Walker’s first grade won the banner and treat for the grade school, and Mrs. Russ Walker’s room won a treat for the high school.