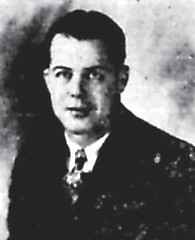 We are proud to mention a name that stands out at Fleming-Neon High School. It is none other than that of our coach, Labe Gregory. He attended grade school at Cades Cave, Tenn., and high school at Tournsville, Tenn. Later he entered Tennessee Wesleyan College to start work on his degree. He spent one year at Union University in Jackson, Tenn. He entered Davis and Elkins College at Elkins, W.Va., where he obtained his degree. He has a major in Social Science and a minor in English.

Coach Gregory began his instructing in 1940 at Tournsville, Tenn. This year marked the beginning of two great events in his life, one his start as an educator, two choosing his companion for life. He married the former Miss Etha Adams of Tournsville, Tenn. She is a very nice person with personality and looks, who has been a great helper to the coach.

As the years go by we find our coach leading a very active life. He has played professional ball for Cincinnati and has participated, in all, in 13 years of football.

In 1942 he was coach at Coeburn, Va., where his boys won the Wise County championship, by winning eight games and tying one.

In 1943 he entered the Navy. Returning to civilian life in 1946, he again coached at Coeburn, Va. He found things in bad condition at Fleming. He has worked very hard to improve our high school’s physical education department and to form a wonderful football team. He is well liked by all his boys, who work right with him. Our team is one of the best small teams in the county. We all are very proud of our coach and hope he will continue to stay at Fleming-Neon High School.

This year, to further inspire Coach in his ambition, he became the father of a very cute baby girl, Patricia Gail.

Coach Gregory has one ambition, he hopes to reach someday, that is to coach at Southern California. May the best of luck be with him as the years go on.

The Fleming-Neon Pirates journeyed to Sevierville, Tenn., last Friday and defeated the Sevierville boys 20 to 6 for the Pirates’ second win of the current football season. In their opening game two weeks ago they defeated Prestonsburg 19 to 14.

Coach Labe Gregory’s boys defeated a much heavier team when they downed the Sevierville team and the final score was something of a surprise.

Scoring players for the Pirates were Burns, Stapleton, and Hall, with Trinkle and Tucker adding extra points. Outstanding lineman for Fleming were Bobby Ladd, while Kilby was the best for Sevierville. Staffle made the only marker for the losers.

The Pirates have their first home game of the season when they meet Belfry on the Fleming-Neon field Saturday evening, Sept. 17, at 8:00.

The Tri-Hi-Y and Hi-Y gave a Christmas program in the auditorium of the Fleming-Neon High School. The two introductions were given by Joy Wright, Tri-Hi-Y president and Joe Trinkle, president of the Hi-Y. Scripture reading was by Jimmie Preston and special singing was by the high school trio, Eunice Hale, Mary Jo Craft, and Jonelle Collier. Christmas in other lands was given by Buddy Curr (Italy), Dorthy Hush (French Canada), Carlie Tolliver (Germany) and Mary Little (Sweden). “My Ideal of Christmas” was given by Johnny Welch as Service, Patsy Simms as Love, Roger Jackson as Unselfishness, June Cook as Giving; Bill Kindrick acted as Santa in the gift exchange. The Tri- Hi-Y made up a gift basket for some needy family to be given on Christmas Eve.

(The above article from the Dec. 22, 1949 Mountain Eagle.) Fleming basketball game supports band

The Fleming-Neon basketball team defeated a team made up of Fleming alumni Monday, Nov. 21. The final score was 51 to 28.

The proceeds of the game go toward support of the recently organized Fleming- Neon band. The amount realized on the event was $121.93.

It is reported that the community is wholeheartedly behind the band project and that many other events are being planned to support the new organization.

Pirates come from behind to win over

The Fleming-Neon Pirates came from behind last Friday night to defeat Pikeville on the Fleming field by a score of 26 to 13.

Pikeville ripped off two quick touchdowns. Fleming’s Jack Hall showed his talent when he marked up a touchdown for the Pirates in the second quarter to end the half 13 to 6.

In the third quarter Stapleton, quarterback, faked a lateral to Hall and cut off tackle for a 45-yard run for another Pirate score. With good blocking Jack Hall tied up the score with the extra point.

In the last quarter, Burns carried the ball to the goal line but was stopped just short of the mark. Stapleton slipped over for the score. Burns made good the extra point.

Stapleton intercepted a Pikeville pass and scored his third touchdown on a 40-yard run.

The Pirates meet the Whitesburg Yellowjackets this Friday at Whitesburg to decide the championship of the Sandy Valley Conference.

“Just Ducky” given by

The play was presented to raise money for junior class activities. Mrs. Walter Hill was in charge of direction.

The Neon- Fleming Grade and High School this year has a total enrollment of 573, according to Principal William B. Hall. In the high school, there are 328, 38 more than last year’s alltime record of 290.

The high school enrollment breaks down into 118 freshmen, 110 sophomores, 63 juniors, and 37 seniors. The school began this year’s term on Aug. 29.

There are 20 teachers at Fleming this year, one less than last year’s number. Two new courses have been added, home economics II and Folk Club. The Folk Club is part of the school’s physical education program.

The walls of the halls have been painted and the auditorium, lunchroom, and outside trimming also have a new coat of paint.