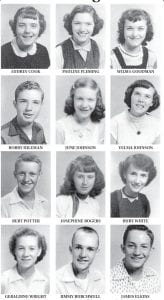 The Pirates from Fleming Neon ousted the Wildcats from Kingdom Come in the opening round of the 53rd District play at Whitesburg, Wednesday night by a score of 80-57.

Long of Kingdom Come opened the ball game by hitting a hook shot to send his team into the lead 2-0. Johnson of Fleming-Neon then hit one of two charity tosses and Hall sunk a pair of the same putting Fleming Neon in the lead 3-2. Cornett of Kingdom Come then hit from the floor to change the lead but Hall of the Pirates then hit for two more free throws to give Fleming-Neon a lead that was never extinguished. Sergent hit for the Pirates’ only field goal of the first period, but 10 free tosses proved enough to give the Pirates a 12-7 first period lead.

During the second frame of play, the Wildcats seemed to play on even terms with the Fleming-Neon five, but the Pirates kept their fivepoint lead and increased it to nine points by half-time by 34-27.

Play during the third period of play picked up for Jack Fugate’s Wildcats as they narrowed down the Fleming-Neon edge to five points. But, as the final period got underway, the Wildcats fell apart and the Pirates stayed right in there fighting to increase their final victory margin to 23 points at 80-57.

Vanover of Fleming-Neon blazed the buckets for 23 points followed by Harry Johnson with 19. Cornett of Kingdom Come tallied 19 also.

The Fleming-Neon Athletic Banquet of 1956 was held at 7:30 on May 8, in the lunchroom of the Fleming- Neon Grade School. A large crowd of over two hundred was present. Fleming-Neon was honored by the presence of Coach Blanton Collier, Head Coach of the University of Kentucky. Coach Collier’s inspiring speech was one that will long be remembered by those present at the banquet.

The following program was presented after a delicious meal was served with the help of the Home Economics Department. The invocation was given by Rev. Clay Arnold. Toastmaster Judge James M. Caudill; Recognition of Football

“I Cover the Campus” by Janice Bentley

Do you take Carl Webb to be your lawful wedded husband? How about it, Connie Reed? Maybe Janice Quillen and Billy Mullins will be dating steady soon if all the things we hear are true. Is that right, Janice? Walter Kincer, we’re trying to help you and Phyllis Hall all we can, but we can’t do much without your cooperation. Dickie Quillen seems to like studying Algebra with Anna Warf, but who believes learning Algebra is his only motive? Lester Young, we believe you are finally making progress with Linda Champion. Wonder why Janice Bentley talks so much about Morehead? Is it because Dwight Baker goes to school there? Edith Quillen sure is looking forward to the year 1957. That’s when Alvin Bentley will be home to start serving her. Remember: Love was made for two – but always paddle your own canoe!