With almost every bodied boy in the armed forces of our country, Fleming’s football squad will severely feel the effects of the war.

This season our football squad has reduced greatly, as compared with last year’s team. With the seniors who graduated and the others that left to go to the Army, Fleming will only have three first team men left. They are Elbert Richardson, Elmer Trinkle and James Gooch. Our new coach, Mr. Jason L. Holbrook, assisted by that all-star end, Francis (Fossil) Johnson, is doing a splendid job with the boys. 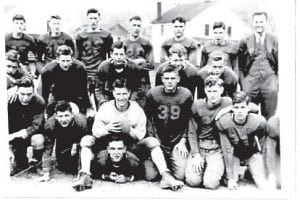 Fleming High School boys and girls went on a picnic Sunday to High Rock. Those who were present were Holland Hall, Don Adams, Homer Gibson, Jr. Rudder, Jack Burkich, Hansford Wright, Pauline Caudill, Ona B. Quillen, Reeda Reasor, Aileen Cole, Anethea Reasor, Kathleen Reed, Mrs. B.H. Crae who has been in Louisville for a while taking a Beauty Culture Course is home for a few weeks.

The junior class of Fleming High School under the sponsorship of Mrs. W.B. Hall presented a three-act comedy, “Under Western Skies” Tuesday, March 16.

We, the junior class, were very glad to give this play and we were honored with a large audience including Supt. of Schools Martha Jane Potter. We are grateful to the parents, students, teachers, and friends who helped to make the play a success.

The proceeds from the play were eighty dollars. This money will be used to entertain the seniors.

This is your old reporter again to report the results and plays concerning the game played in Pikeville last Friday night, although I was very unfortunate in missing the game. I have heard many firsthand reports of the game which brought the “Pirates” their 6th Conference victory without a loss — and therefore makes them the champions of the Big Sandy Conference.

But now back to the game. The “Pirates” won the game 16-14 and from all reports were never in such deep trouble that they were worried — even though the boys from Pike County seemed to have most of Fleming’s line plays stopped.

No doubt the most outstanding and probably the deciding factor was a run by Vertuca, the consistent blocker-tackler and runner of the F.N.S. eleven.

Pikeville kicked off to Fleming — Vertuca took the ball on about his own ten and scampered all the way over for a touchdown. This was the longest run of the season by a “Pirate” or any of their opposition.

The nearest thing being the 69-yard run by “Speedy” Elbert Richardson against their arch rivals from Jenkins. As I have said before, the “wearers” of the Purple and Gold didn’t have such a difficult time in defending the Pikeville team who had beaten them for the past two years and they came out victorious to the tune of 26 to 14.

This game brought down the curtain on the careers of 9 lettermen who graduate at the end of the year.

These purple players are from the line. The Pirates lose “ Fossil” Johnson, a large end who has had a very successful season for the past two years since he has been converted from a center to an end by the former coach, Vincent Vaughan who has been home for the past few days on leave from his duties as a Petty Officer in the United States Navy. The Fleming team also loses Maurice Jones, a small but speedy guard who has been very tough in his years as a “Buccaneer.”

Then Denzil Hall, the center who has had a tough time until this year, but has really proven his worth at the pivot position.

Lester Bentley, the largest man on the squad is to graduate too, he has been one of the big “cogs” in the success of the team.

As you know, Delmar Hall, another end and brother of Denzil, was too old because just before the Whitesburg game he also graduates.

In the backfield they lose Ralph Richardson who is also a transformation, he was formerly an end — a successful end and now a successful back.

Sylvester Allen will go too. This is a player who has had one of the most sparkling and brilliant careers of any “Pirate in history. This can also be said for Tony Vertuca. He has really been an important factor in the success of the Fleming team.

J. D. Mullins has not been a regular but he has seen as any of the rest of the team and on any other team, would undoubtedly be a regular.

Now that the football season is closed, basketball will soon follow and the Pirates should have a classy team on the hardwood as well as on the gridiron.