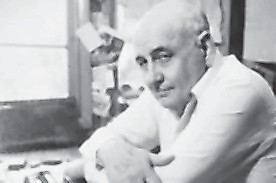 James Still, well-known poet, storyteller, novelist, and lexicographer, will conduct a two-day workshop at Fleming-Neon High School on March 24-25, 1998. This workshop is part of the Read and Respond Program which is being implemented at the school to highlight reading and writing activities. The program challenges students to get involved in the world of reading.

The Read and Respond Program involves students in small group readings and discussions.

A former poet laureate of Kentucky, James Still now spends valuable time addressing students throughout the state, highlighting the benefits and rewards of writing. His appearances are well received by students and school personnel because they actually get involved in and participate in his storytelling.

Being a native of Alabama, James Still came to work at the Hindman Settlement School as teacher and librarian. He further demonstrated his love for books by transporting them on his back into the hollows and mountains of rural Knott County. He was the walking “bookmobile” as young boys and girls got their first taste and love for the world of reading through his exposing them to books.

James Still is best known for his volumes of short stories, “River of Earth”, “On Troublesome Creek” and

Hounds of the Mountains”, volume of poetry. Later works include “Riddles and Rusties” and others. He best writes impressions and images of local Appalachian people and events that he has come to know in his nearly three-quarters of a century of living in Knott County.

Still has received numerous writing awards both locally and nationally. One of the best rewards that he can receive is the appreciation and admiration of young people for his writings. At ninety-one, James Still is that powerful voice of Appalachia.

(The above article from the March 18,1998 Letcher County Community Press.)

In this game played at Fleming-Neon, the Lady Pirates came from behind in a last quarter rush to defeat the Pikeville Lady Hawks 68-65.

(The above article from the February 18, 1998 Letcher County Community Press.)

Saturday night Fleming- Neon observed Basketball Homecoming 1998 during their game with Mountain Mission. This was a night to be remembered for many of the young people who had a part in its ceremony.

Serving as Master of Ceremonies for the evening was Mr. Jimmy Mullins. Also, on hand was the Pride of the Pirates Pep Band under the direction of Mr. Dan Brennan, who was also on hand to assist in the ceremonies.

Miss Carrie Nicole Mc- Cray, the daughter of Tim McCray of Jenkins and Doreen McCray of Neon. Carrie is an honor student.

Miss Amber Nicole Stevans, the daughter of William and Melinda Stevans of Payne Gap. Amber is an honor student.

Miss Jona Danielle Wright, the daughter of Barry and Sheree Wright of Neon. Jona is an honor student and was escorted by her uncle, Jesse Wright.

Miss Betty Marie Bentley, the daughter of Mike and Debbie Bentley of Jackhorn. She was escorted by her uncle, Tom Boggs.

Miss Amanda Sturgill, the daughter of Jeff and Patricia Sturgill of Jackhorn.

Miss Tiffany Danyell Taylor, the daughter of Steve and Debbie Taylor of Whitaker.

Miss Amanda Bentley, the daughter of Steve and Mynette Bentley of Millstone. Amanda is an honor student.

Miss Amanda Lynn Jenson, the daughter of Linda and Richard Jenson of McRoberts.

Miss Brandie Melissa Mobley, the daughter of James and Darlene Mobley of Deane.

Miss Mia Wright, the daughter of Barry and Sheree Wright of Neon. Mia is an honor student.

Miss Jeannine Amanda Collier, the daughter of Jack and Jennifer Collier of Neon. Jeannine is an honor student.

Miss Kristin Leigh Craft, the daughter of Rodrick (Dusty) and Madonna Craft of Cromona. Kristin is an honor student.

Miss Lori Beth Isaac, the daughter of Sondra Holbrook of Kona and Wayne Isaac of Wise, Virginia. Lori Beth is an honor student.

Miss Mandy McElroy, the daughter of Jeff and Tina McElroy of Payne Gap. Mandy is an honor student.

Presiding over the Court was 1997 Basketball Homecoming Queen, Miss Misty Holbrook, the daughter of Verlis Holbrook of Neon and Phyllis Holbrook of Millstone. Misty is currently pursuing her education by attending Southeast Community College-Whitesburg Campus.

Standing Honor Guards were cheerleaders: Cheryl Osborne, daughter of Guy and Louise Osborne of Neon, and Lora Stamper, daughter of Bobby and Sherry Stamper of Thornton.

Senior captains of the Pirate Basketball Team, chosen by their fellow players, crowned this year’s queen. The captains are Joe Bentley, son of Mike and Debbie Bentley of Jackhorn, and Jarrod LeMaster, son of Gary and Wanda LeMaster of Jackhorn.

(The above article from the February 4, 1998 Letcher County Community Press.)

The Mountain Heritage Essay Contest was dominated by writers from Fleming-Neon High School. This year’s contest allowed students to select a profession that is important to the heritage of Letcher County. Winners were Miranda Lee Johnson, Mia Nicole Wright and Mandy Fleming.

The first-place winner was Miranda Lee Johnson, daughter of James and Celeste Johnson of McRoberts. She is currently a junior at Fleming-Neon and is taking the Advanced Placement English III. She loves to write short stories, essays and poems in her spare time. Miranda entitled her essay “Teachers: Proudly Serving Letcher County.” Miranda stated, “I really feel that teachers deserve to be acknowledged for giving their services to better our education.”

The second-place winner was Mia Nicole Wright, daughter of Barry and Sheree Wright of Neon. She is a junior at Fleming- Neon High School where her schedule includes Advanced Placement U.S. History and Advanced Placement English III. Mia chose, “Education: Proudly Serving Letcher County,” as the title of her essay because she says, “Education is a very important thing and this is why I chose to write about this particular topic.”

The third-place winner was Mandy Fleming, daughter of Rob and Glenda Fleming of Jackhorn. She is also a junior at Fleming- Neon where she is taking Advanced Placemen U.S. History and Advanced Placement English III. She is also a member of the Lady Pirates Softball Team. Mandy selected, “Coal Miners: Proudly Serving Letcher County,” as the title for her essay. She stated that she wrote about coal miners of Letcher County because she felt, “They deserve recognition for what they have contributed to Letcher County.”

(The above article from the October 1, 1997 Letcher County Community Press.)