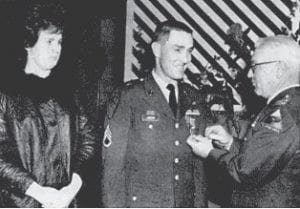 In February 1966 he was an aircraft gunner with the First Squadron, 9th Cavalry, First Cavalry Division at Bong Son, Vietnam.

The aircraft crews were sleeping in or near their aircraft when the Viet Cong launched a mortar attack on their defensive position.

SSG Adams and an aircraft crew chief were lying on their sleeping bags when the attack began. They ran for cover, but the crew chief was hit by shell fragments. He fell in an open area and mortar rounds continued to land around him.

Reaching cover and discovering that the crew chief was not with him, Adams ran back and helped him to a protected position.

Mortar shells blanketing the area caused extensive and serious wounds to Adams’s face, chest, and legs. He was hospitalized after the attack.

Adams also received the Purple Heart for the action.

Some of the members of the class were: