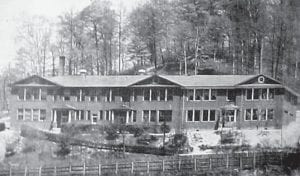 What’s a football game without majorettes at halftime? Baton twirling and flashy steps were enjoyed by all during the halftime at the Hazard-Fleming-Neon football game.

A display of precision was staged by the Fleming-Neon majorettes, Saturday night.

The majorette unit includes six majorettes, Sharon Riddle, Ernestine Wright, Linda Champion, Anne Quillen, Janice Spears, and Yvonne Bentley; two mascots, Anna Laura Caudill and Janet Hall; and one drum- majorette, Sandy Skaggs. (Some pictures were not available for this article.) There was color and rhythm a-plenty as the girls twirled in their new, white, military-styled uniforms with gold trim and hats to match.

The majorettes are self-trained and most are champion twirlers, proved at a contest held at Bristol, Tenn.-Va. last year. The girls walked away with many trophies and medals for the state of Kentucky. 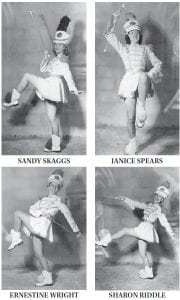 Strict discipline is the rule among the majorettes. Many girls try out, but few can achieve the precision demanded.

Who was Edward Wright with Saturday night, Judy Graham? Yvonne and Peanut really have it bad. Whose football jacket has Dallas Horton been wearing? Just ask R. Dishman. Who’s the senior girl that looks starryeyed when someone mentions Sonny Cox, I wonder? Robert Smith has a crush on Barbara Gibson. Wake up, gal. Tommy Sizemore spends a lot of time at Curry’s Restaurant. Could it be because of Mary? Wedding bells will ring Christmas for Paul Anderson and Nova Lemastar. Who comes up to Haymond to see Ida Collins almost every weekend? Couldn’t be that boy from Lee’s College could it, Ida? Looks like the army took out one and only Melvin Potter and Bobby Peace. Freddy Bentley has his eye on a certain girl. Could it be Pearlie S.? Looks like Madonna Hall and Don Quillen are still going steady. Mary Louise H., who is the boy whom you have been getting letters from every day? Tell us, Mary.

Football fans in and around Fleming saw the Fleming Pirates down the Belfry Pirates 7- 6 in the first home and conference game of the young football season.

Fleming drew first blood in the first quarter as James “Red” Hill circled right end and went for the Pirates’ only touchdown. Hill also booted the extra point and gave Fleming a 7-0 lead, which stayed that way at halftime. Fleming just couldn’t seem to get their offense working just right and failed to score any more in the ballgame. Belfry’s touchdown came as a result of an intercepted pass in the latter part of the game.

They lost the chance of tying the score when an off- sides penalty nullified their extra point.

Fleming ’ s defense looked very good in holding Belfry to 6 points as Belfry is supposed to be one of the stronger teams in the conference this year.

Thomas, along with Tackett, Isaacs, and the other boys in the line, played a real ballgame defense wise. Those who noticed saw that heads-up ball was played all the way by Fleming. And too, they noticed that Thomas was in on about every tackle.

Thomas and Hill, all conference men last year, may be bucking all-state honors this year if they play the ball they are capable of playing and we are all hoping they won’t disappoint us.

The Fleming-Neon fans really got a large charge out of seeing the Pirates romp over the Cumberland Redskins 45-0. Although the Redskins team was not one of the better teams, the Pirates looked real good in winning their second game. It was strictly a Pirate game from the early part of the ball game.

When Fleming got the ball after Cumberland had to boot, they scored on their first play from scrimmage as Red Hill made the first run which proved to be the first of a series, of long runs by the Fleming team. Fleming showed fine down field blocking throughout the ball game as Fleming ran some real long runs that either made or set up touchdowns. Fleming’s first play from scrimmage netted 45 yards and a touchdown for Hill. Hill, whose running was superb, made runs of 50, 55, 40, 35, and 3 yards.

Bentley’s touchdown came after a good run by Chaney and a 15-yard penalty by Cumberland and was from about 12 yards out.

Hill made two conversions and Quillen made one. At this point Hill is the leading scorer in the conference. Peanut Hall, along with the rest of the backfield, made several good runs, one of which went for 60 yards and a TD. And not saying that the rest of the boys didn’t enjoy scoring, I would say that Peanut had the happiest look on his face I ever saw.

(The above articles from the December 1957 “Fleming Hi Times” school paper.)