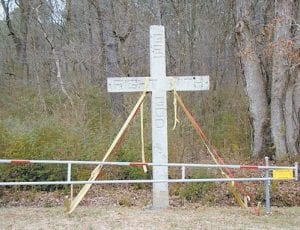 The photo shows one of the roadside concrete crosses erected by Rev. Henry Harrison Mayes. (AP Photo/The Museum of Appalachia)

Generations of Appalachian Southerners are familiar with the work of the Rev. Henry Harrison Mayes, even if they don’t know his name.

Mayes, who was born in 1898 and died in 1986, spent a lifetime creating giant, rugged concrete crosses that stood by roadsides before there were interstates. They proclaimed messages such as “Get Right With God” to passing motorists.

Two of the crosses recently have been standing in the way of area highway expansions.

One was on Dalton Pike in front of Dalton Pike Baptist Church, where utility lines are being moved and grading done in preparation for a widening.

“It was on the right of way and would have been destroyed had not the members of the church moved it,” local teacher and historian Debbie Moore said. “It took about three hours.”

State Rep. Kevin Brooks, RCleveland, asked the Tennessee Department of Transportation to give the church time to move the cross. With a backhoe loaned from Caldwell Paving, men from the church moved the cross out of the right of way. 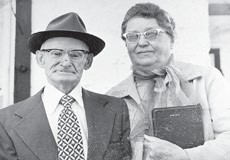 A second Mayes cross did not fare as well. It stood on U.S. Highway 411 in Polk County and was broken during highway widening.

According to the Museum of Appalachian Culture in Clinton, Tenn., Mayes was a young coal miner in Middlesboro, Ky., when he was crushed in a mine accident. He promised to serve God if he survived, and he kept his word.

“At first he tried being a preacher, but he just didn’t have the voice for it,” said John Rice Irwin, who collected antiques for the Museum of Appalachia. “He tried singing, too, and that didn’t work.”

Irwin was a young man when he met Mayes, who was old and frail. Irwin’s antiques collection includes some crosses that were at Mayes’ house when he died.

Mayes tried other media, including a message painted on the sides of a sow that roamed the mining camp in Middlesboro, Irwin said. He also painted his messages on coal-train cars that would go across the country.

“Yeah, the railroad got on to him about that,” Irwin said.

So Mayes turned to the highway crosses. He used metal at first before he found his true medium, concrete. He mixed his own concrete and built his own molds from castoff coal-mine materials.

Mayes never learned to drive, but a couple of times a year he and friends with a truck would roam the highways looking for places to put up crosses.

“No, they didn’t have a particular place in mind when they started,” Irwin said. “He would just see a good place and get out and put one up.”

Like the ones in Bradley and Polk counties, just about all Mayes’ crosses went up in road rights of way, Irwin said.

“He was always getting in trouble with highway departments,” he said.

Around Middlesboro, Mayes was known as a lovable character. Web sites devoted to him describe him as wearing unusual hats and riding around on the bicycle he called his Jeep.

When Mayes died, he was thinking ahead. Among the crosses he left behind at home, some carry detailed instructions on how to erect them on Saturn or the Moon.