Hikers here on trail from Alabama to N.Y. 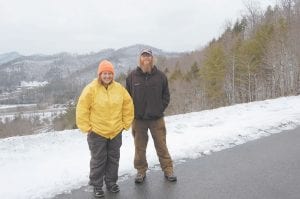 TAKING A BREAK — Joanna Swanson, 28, of Willow River, Mo., and Bart Houck, 43, of Mullens, W.Va., were in Letcher County earlier this month while taking a short break from hiking the Great Eastern Trail, which is billed as “America’s newest long distance trail for hikers from Alabama to New York.”

Two hikers recently walked portions of the Pine Mountain Trail as a part of their quest to hike the entire Great Eastern Trail.

Joanna Swanson, 28, of Willow River, Mo., spent a year as an AmeriCorps VISTA volunteer as a Great Eastern Trail coordinator where she spent most of her efforts establishing the portion of the trail in Mullens, W.Va. There she met Bart Houck, 43, and the two decided to take six months and hike the 1,600-mile trail from the beginning point in Flagg Mountain, Ala., which is the southern most Appalachian mountain above 1,000 feet, to the end of the trail in Finger Lakes in New York. They hope to finish their hike in June, weather permitting.

Swanson has hiked the Appalachian National Scenic Trail, which stretches from Springer Mountain in Georgia to Mount Katahdin in Maine. Her nickname is Someday. Houck’s is Hillbilly Bart.

“It’s a tradition on the Appalachian Trial to get a trail name,” Swanson explained.

The duo, who started their expedition January 10, have hiked more than 600 miles including 170 miles in Alabama and 100 in Georgia. They also hiked some in Tennessee and Kentucky. Houck and Swanson entered Kentucky at Cumberland Gap.

“We’re just happy to get into Kentucky,” Houck said during their stop here. “Every state has its own beauty. What I’ve learned is just the energy behind these other states and how passionate people are about their hiking trails.”

Swanson said Cloudland Cannon in Georgia has been one of her favorite sites they have seen so far.

“In Tennessee there were so many cool rock walls and waterfalls,” she added.

They take photos with a digital camera and smart phones. They also update their blog, which can be found at www.gethiking.net , to document their experiences and keep family and friends updated about their journey.

“We also try to take videos to record how we are feeling,” said Swanson. “I carry extra batteries.”

In addition to cameras and phones, Swanson carries a SPOT Satellite GPS Messenger. She hits a button and it sends her parents the coordinates of where she is, letting her family know that she is okay. If they got into trouble, the device has an emergency button that would help rescuers find them.

The pair usually hike anywhere from six to 10 hours a day depending on the weather. Swanson carries a backpack that weighs about 32 pounds and Houck’s backpack weighs about 42 pounds.

They sleep in a tent when a shelter isn’t available. Swanson said they always look forward to finding shelters and sometimes stay in a hotel or at a friend’s house. They took two days off from hiking in Harlan County and two days off in Letcher County because of inclement weather conditions earlier this month.

“It’s nice to get zero days where we don’t hike,” said Houck. “You have to stop and let your body heal and repair itself.”

After leaving Kentucky, Swanson and Houck hiked in West Virginia where they took a couple of days off in Houck’s hometown of Mullens. His parents cooked some of his favorite foods and he was also reunited with his dog, Sula, which he hadn’t seen in two months.

When Houck and Swan spend several days at a time in the woods they pack tortillas, cheese and other lightweight food items to last from two to six days.

“It costs me an average of $6 a day to eat, which I think is extraordinarily low,” said Houck.

Swanson said hikers burn about 6,000 calories a day so they can eat whatever they want, such as a Snickers candy bar for breakfast, and not gain weight. On extremely cold or rainy days, Swanson and Houck don’t stop to eat. Instead they eat while they walk.

Swanson said they haven’t come across many hikers on the Great Eastern Trail, but often encounter day hikers in parks.

“This is a trail that is not 100 percent complete,” she said. “We’re doing it mostly for an adventure and to talk to people about the trail. We really want people to know about the Great Eastern Trail.”

Houck said if 1,000 people hike the Great Eastern Trail each year, local businesses including those in Letcher County would begin to see an economic boost.

“Hopefully, it can do great things to towns along the way,” Swanson said. “We spend our money a little bit here and there.”

She is also in contact with board members of the Great Eastern Trail and will report to them on how the trail can be improved.

Swanson and Houck have had to walk on roads at different points of their excursion because the trail is new and isn’t complete.

“That is where you get local help to get rerouted,” said Houck. “It could be a lot more complicated. Even though we are hiking alone, we are not alone.”

They also have contacts along the trail who have helped them. Extension agents in Letcher and Harlan counties have helped. Others put them in contact with people they know who live near the trail.

“It has definitely been a snowball effect,” said Swanson, adding that the trip would be more diffi- cult if they didn’t have help along the way.

Shad Baker, agriculture agent for the Letcher County Extension office and a member of the Great Eastern Trail Association, hiked some with Swanson and Houck. They stayed at his house a few days when it snowed.

Swanson said motorists sometimes stop when they are walking along a road and ask them if they need anything.

“It has really been overwhelming the kindness we have been shown,” she said.

Before they began their adventure, Swanson spent a great deal of time researching trails and gathering maps.

“It took me a lot of time and planning to get maps,” she said.

She organized packages containing maps for different legs of the trip. Her mother mails the packages to different locations on their way to New York.

“Maps are heavy,” said Swanson. “Most fall apart by the time we are done with them anyway.”

The two said they since they have been hiking they haven’t kept up with current events.

“We’re pretty much out of it,” said Swanson.

Houck said they spent a night in a hotel and didn’t even turn on the television.

“We kind of forgot it was there,” he said.