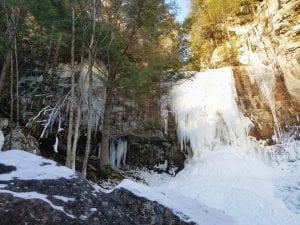 FROZEN FALLS — Les Little snapped this photograph of a frozen Bad Branch Falls on January 3. The falls are located on Pine Mountain at the headwaters of the Poor Fork of the Cumberland River. (Photo by Les Little)

The five of us hiked across Pine Mountain at one of its highest peaks in Letcher County during our summer break from college. Larry Breeding of Isom, Ralph Adams of Whitesburg, Lindsey Back of Jeremiah, and I were on a summer

EDITOR’S NOTE: When retired teacher Tony Blair saw Les Little’s photograph (seen above) of a frozen Bad Branch Falls, it reminded him of his very first hike up Pine Mountain to see the wonder of nature that lies in Letcher County. break in the late 1960’s from our studies at Berea College. The fifth person was a friend of Ralph’s, but I have forgotten his name. He carried a rifle to defend the group against possible attacks by roving packs of wild dogs and from poisonous snakes. Rattlesnakes are numerous on Pine Mountain.

We drove two cars to the mouth of Bad Branch on the east side of Pine Mountain. The people living there were kind enough to let us park one car in their yard. This hike in the late 1960’s was before the Bad Branch Falls trail was developed and a parking lot was built. We all rode in the other car back across Pine Mountain and a short distance up a side road and parked. This side road exited US 119 in a very steep horseshoe curve.

On our hike up the steeper western slope of the mountain, we passed a cavity in the ground, which we believed was the notorious Bull Hole. A story goes that the Bull Hole received its name when a large bull fell into the hole, a windlass was erected, a man in a basket was lowered some 400+ feet down the hole, a rope was harnessed to the dead bull, and the bull was hauled back to the surface.

Since that time, the Bull Hole has been the destination of political candidates following their election defeats. The following was taken from the article “The Bullhole” published in The Mountain Eagle, March 4, 1909, Page 3: “Located high upon the broad breast of the Cumberland, overlooking Whitesburg, and surrounded on all sides by giant boulders and primeval solitudes, while over its wide, thirsty mouth the mountain owl and dingy bat flit in silence, it could but be a suitable habitation for the rejected and damned.”

By midday we made it to the mountain’s rocky top, which was barren of soil and vegetation. After eating our lunch, resting, and enjoying the beautiful scenery, we gathered our trash and began descending the steep (but less steep than the western slope) eastern slope of Pine Mountain into the headwaters of Bad Branch.

Bad Branch Gorge is narrow and deep with very steep sides. Bad Branch had been logged some years earlier, and we hiked along a logging road by the stream. But we came to a place where the mountainside had been too steep and rocky to dig a logging road. The loggers had built a “bridge” sticking out from the side of the mountain, very much like a first floor porch roof sticks out from the side of a two-story house. Large logs, supported from the bottom, had been laid horizontally and parallel to the mountainside. Apparently, other logs had been placed perpendicular to both the mountain and these horizontal, parallel logs. One end of the latter logs must have been supported by the mountainside and the other end was laid across the horizontal logs, much like the rafters of the porch roof referenced above. This would have created a corduroy road bed of logs along the cliffy mountainside over which additional logs could be hauled.

The only logs that were still there on our trek were the horizontal logs, which appeared to be still solidly supported. Because the steepness of the hillside, we walked these logs until the dirt path resumed on the side of the mountain.

Eventually, we descended to Bad Branch Falls. Obviously, in order for there to be a waterfall, there has to be a sudden drop in the surface of the land. It seemed for the moment that we were trapped between the steep hills of each side of the stream and the 60-foot high cliff that created the water fall in front of us. The cliff extended around the mountainside in both directions from the streambed.

We began searching each side of the water fall for a path to the bottom of the cliff. Off to one side, we discovered that a tall tree that had been growing near the base of the cliff had fallen against the cliff. It had been dead long enough for most of the branches to have decayed and broken off, leaving stubs sticking from the trunk. We escaped our trap by scaling down this tree.

After stopping here for a while, listening to the sounds of the falling water and wading in its coolness, we continued on out of the holler. We thanked the people for allowing us to park in their yard, and then we drove the car back across Pine Mountain to pick up the other car.

We had a very enjoyable hike. And we had a very lucky hike because we were not attacked by wild dogs, not bitten by rattlesnakes, and, looking back on it, we were especially lucky that the logs we walked and the tree we scaled were solid enough not to have broken under our weight.

Tony Blair, of Jeremiah, is a retired schoolteacher.