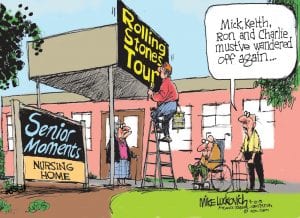 It’s Hillary Clinton, not Jeb Bush, who will take former President George H. W. Bush as her role model. Her road to victory was blazed by Jeb’s dad in 1988.

It would help a great deal, of course, if events also flowed her way, as they did for Bush 41. In 1988, gross domestic product grew by 4.2 percent. There’s nothing like rapid growth to incline voters toward keeping the same crowd in power. Relations with the Soviet Union were warming. That helped Bush Sr. too.

But President Ronald Reagan and his vice president also made an arrangement that was vital for the GOP’s success. By the end of the Reagan presidency, the country was not prepared to take the status quo again without some alterations and embellishments. Voters had signaled their desire for something different in the 1986 midterm elections by handing the Senate back to the Democrats after six years of Republican control.

So Bush ran as Reagan Plus. He promised that he would be both an “Education President” and an “Environmental President,” neatly stamping himself with the new and improved label. Both issues appealed to middle-of-the-road swing voters, many of whom had voted for Reagan but were not hard-core Reaganites.

The key was the Reagan White House’s complicity in Bush’s partial distancing of himself from the Gipper’s legacy. Reagan and his lieutenants were happy to give him some running room since they knew that a Republican victory in 1988 was the surest way to ratify the conservative legacy of the 1980s.

And Bush organized a brutal campaign against Michael Dukakis, the Democratic nominee, well-described in Will Rabbe’s recent documentary, “Above the Fray,” around issues connected to race, crime and patriotism. Bush identified the then Massachusetts governor with the aspects of liberalism that voters had rejected before. Bush’s campaign manager Lee Atwater saw how important white working-class voters would be. They will be significant again in 2016.

Thus, Hillary Clinton’s campaign will come in two parts, the first related to President Obama, the second taking straight aim at the radical form of conservatism that has engulfed the GOP.

She must stay close enough to Obama — and he to her — to rally the large Obama base that will get her most of the way toward a majority. Clinton can’t expect to generate the same enthusiasm Obama did among the young, particularly younger African-Americans. But she is likely to get most of them to the polls, and supplement their votes with new energy among women. What she cannot afford are signs of awkwardness in her relations with Obama.

But a strategic distance is not the same as estrangement, as long as it’s worked out in advance. David Axelrod, Obama’s longtime adviser, has noted that voters are always looking for the corrective to whatever they didn’t like in the previous administration. Clinton will present herself as both a realist when it comes to the intransigence of the Republican Party — it took Obama time to acknowledge this — but also as someone with a history of working with Republicans. It will be an intricate two-step. “Tough enough to end polarization” may seem like an odd slogan, but something like it will be at the heart of her appeal.

And she will have to go both to Obama’s left and right. Clinton needs to run hard against economic inequality, pledging to get done the things Obama couldn’t on issues ranging from family leave, pre-K and higher education. She will have to be strong on expanding the bargaining power of the lower-paid. Trade will be the tricky issue here.

She cannot break with Obama’s broad direction on foreign policy but she can signal a personal toughness (that word again) to reassure voters who are somewhat more hawkish than the president. He and she will have to find a way to orchestrate this, and it won’t be easy. The Iran negotiations will be the first, very challenging test.

But if things get dicey, the Republican right will prove to be her best ally. She will ask repeatedly: Does the country really want to give control of both the White House and Congress to a bunch of right-wing ideologues whom most voters mistrust? The elder Bush found that there was one more campaign to run against liberalism. Clinton is ahead in the polls because the country is not looking for a rendezvous with today’s brand of conservatism.

With a little help from the president and a lot of help from her enemies, Clinton can win.