‘Hillbilly,’ often an irritant, can also be a badge of pride 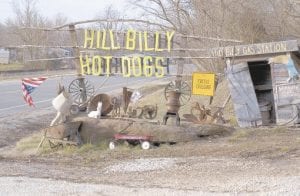 This homemade sign is outside the Hillbilly Hotdogs restaurant in Huntington, W.Va. Patrons eat their slaw-topped dogs at this restaurant amid the trappings of the fantasy hillbilly stereotype: mismatched furniture, jokey signs and even a bathtub and outhouse complete with seats. (AP photo/Jeff Gentner)

When a casting company recently looked to West Virginia hollows for extras to play inbred degenerates, state leaders were loud and clear: go elsewhere for your negative stereotypes.

But many residents just rolled their eyes at yet another unpleasant Hollywood depiction of the Mountain State. After more than 100 years of derision, people here are used to it.

Regional stereotypes are hardly unique: Wyoming residents dismiss their Colorado neighbors as yuppies, southern Californians are derided as airheads, and New Jersey is a standalone punchline for other Northeastern states.

The image of the hillbilly, though – confined not just to West Virginia, but perhaps most potent here – has been a persistent national slander, one which has seen its targets gradually adopt the slur as a badge of pride.

“There’s a confirming acceptance of that image,” said Anthony Harkins, a history professor at Western Kentucky University and author of “Hillbilly: A Cultural History of an American Icon.” “The word ‘hillbilly,’ one of the reasons it has persisted so long, is that it has multiple meanings.”

Where outsiders might conjure images of inbreeding and backwardness, Harkins said Appalachian natives stress positives like close-knit families and a sense of community.

The creation of regional stereotypes can be found all over the world, and seems to meet a primal urge, said Tom Hanchett, staff historian at Levine Museum of the New South in Charlotte, NC.

“It’s this need to find a place to look down on, as well as a place to project our own hopes and fears,” he said.

Hanchett is curator for an exhibit at the museum that examines the portrayal of the South in newspaper comic strips. Although every American region has its own stereotypes, the South occupies a particularly prominent place in the national imagination, he said.

“The South became a sort of convenient ‘other’ for mainstream America,” he said.

But Hanchett pointed out that those stereotypes have often been adopted with pride by their targets. And, just like the N-word, the meaning of the H-word depends on the intent of the speaker.

“When it’s self-described, it’s a term of endearment. When someone else uses it, particularly an outsider, you better watch out,” said John Lilly, editor of Goldenseal, the magazine of West Virginia traditional life produced by the state’s Division of Culture and History.

That dynamic can be seen every day at Hillbilly Hotdogs in Huntington, a popular restaurant where diners enjoy down-home grub at low prices. Patrons eat their slaw-topped dogs amid the trappings of the fantasy hillbilly stereotype: mismatched furniture, jokey signs and even a bathtub and outhouse complete with seats.

There’s no self-loathing here, just a tongue-in-cheek celebration of what would otherwise be a hurtful stereotype.

But the flip side of that cheerful image – the degenerate inhabitant of the backwoods – persists, thanks to pop culture’s enduring fascination.

“I call it inbred filmmaking,” said Jeff Biggers, author of “The United States of Appalachia.”

Biggers believes the negative stereotypes that date back to the 19th century get continually recycled in a self-referential loop, so that one generation’s “Deliverance” becomes another’s “Wrong Turn.”

The popular image of poor rural whites seems to fluctuate between the monsters of those films and the clueless yokels of comedy bits like the “Appalachian Emergency Room” skits on the television show Saturday Night Live.

The problem, Biggers said, is that these depictions have very little to do with daily life in Appalachia.

Ticking off a list of accomplished West Virginians, from the founder of Black History Month to NASA engineers to Nobel laureate Pearl S. Buck, Biggers said these very real Appalachians are too often overshadowed by their fictional counterparts.

“The hillbilly is the last acceptable slur in the country,” Biggers said.

Echoing that sentiment, Harkins said the stereotype functions as a safe haven for bigoted attitudes that can no longer be directed at other groups.

“Because it is an image of poor whites, it’s not seen as racist or discriminatory in the same way it would if it were applied to minority groups,” Harkins said.

That might be changing, though. After West Virginia political and labor leaders protested the casting call last month, the producers of the horror film “Shelter” apologized and fired the casting director.

Not that most West Virginians particularly cared. More than a century after the word “hillbilly” first appeared in print (in a New York newspaper), people here have learned to be comfortable with themselves, whatever outsiders may think about them.

Levine Museum of the New South: