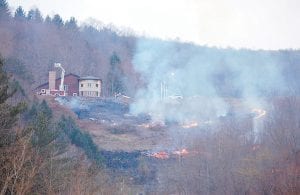 — Several motorists driving on the Whitesburg bypass Tuesday night thought the Letcher County Extension Office was on fire. It was a false alarm. Extension office employee Mitch Whitaker said he was doing a controlled “burn off ” on the hillside in front of the building to clear brush so Christmas trees can be planted there later this month. 4-H students and other volunteers will plant about 200 fir trees on the land April 29. The fire was set at 6:30 p.m. Members of the Whitesburg Fire Department were there to help and receive fire training hours. Whitaker said the fire got a little out of hand at one point, but that firefighters were able to keep it under control. (Photo by Sally Barto)