His military career is over, but Letcher man still serves 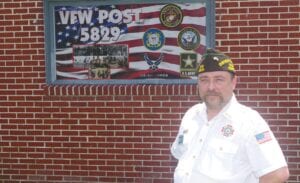 STILL SERVING — Darren Atkins of Mayking was recognized by the National Veterans of Foreign Wars last month for his volunteer work. Atkins, who served in the Army for 14 years, is Senior Vice Commander of Post 5829 in Whitesburg, and District 14 Chaplain. He was featured in the national organization’s #StillServing Celebration in July. (Photo by Sam Adams)

It’s been 12 years since Darren Atkins wore the uniform of the United States of America, but he’s still a man on a mission. The mission now isn’t in Europe or the Middle East, it’s at home.

The national Veterans of Foreign Wars honored Atkins, a 1993 Whitesburg

High School alumnus, in July with a video presentation for its first ever #StillServing Celebration week, July 20-24. The virtual event, which culminated in the installation of incoming VFW National Commander Hal Roesch, recognized personal stories of veterans that emerged as result of the #StillServing Campaign which began in February

Atkins was a natural choice for a video. He served for 14 years in the U.S. Army, serving in Kosovo and twice in Iraq. He was discharged in 2008, and in 2018 was recruited to join the VFW, which was rebuilding as veterans came home from the first major conflict since Vietnam.

“It just seemed like a place I could spread my wings and get involved with the community and show people we are there to help the community, not just veterans,” Atkins said.

Two years later, Atkins is the Senior Vice Commander and cook at VFW Post 5829 in Whitesburg, Chaplain of the 14th District, and a fervent volunteer, raising money for disadvantaged teens and sending packages of basic hygiene supplies to disabled veterans around the state. Through his initiative, Op- eration Noble Cause, he created care packages for disabled veterans during the pandemic to provide facemasks, deodorant, toothbrushes, toothpaste, other supplies and camaraderie. He has sent the packages to veterans as far away as Erlanger, Ky., a suburb of Cincinnati, Ohio.

“When we launched the #StillServing campaign it was to bring attention to the unexpected ways veterans continue to serve their country after they leave active military,” said William “Doc” Schmitz, who was VFW national commander prior to Roesch. “The onset of the novel coronavirus COVID-19 multiplied the inspiring stories of veterans’ continued dedication to giving of themselves, now to their local communities. It represents the heart of VFW.”

Atkins was featured on Mike Rowe’s Facebook Watch show, Returning the Favor, in recognition of his efforts. The VFW also got a $10,000 kitchen makeover from the show. Less well-known is his work to help the Sapling Center, which provides career, mental health services, and other support for disadvantaged teens and young adults. His stepdaughter works at the center.

Angie Bush, director of transition age youth services for Kentucky River Community Care, which runs the center, said Atkins is “what community is all about.”

“Not only has he partnered with us to provide masks to our youth at the center and young adults, he has reached out asking how he can help us even further,” she said.

He is now working on a “care package” program similar to what he does for disabled veterans to supply masks and basic hygiene items to young adults at KRCC’s crisis houses, where young people facing critical situations can go until they find a permanent place to live.

Adkins is also interested in helping with the issues of homeless veterans and veteran suicides, and plans to be working more on those issues across the 14th District. While he said there haven’t been any calls yet for services from veterans who are homeless or who are contemplating self-harm, he encouraged them to contact him on his Facebook page if they need someone to talk to. He said there are plenty of veterans at the VFW who understand want other veterans are going through.

“We have a great staff of volunteers at the VFW and we’re always ready to lead,” he said.

Atkins works full-time in Knott County, and he said it’s not always easy to volunteer, but “it’s worth the effort in the end. If you know you’ve helped just one person, it’s worth it.”

He said the outlet for volunteering has been good for him, as well as those he and the organization have helped.

“It’s given me a purpose, and that more than anything is what veterans need,” he said. “I know it sounds cliché, something you’d see on a T-shirt, but for veterans, even when we get out, we stay mission oriented.”

Atkins said he might say it too often, but no one can help a veteran like another veteran. The best part of his continued service, he said, is the camaraderie he finds with other veterans.

“Just people around people who understand you, and have some of the experiences you have … you can’t put a price on that,” he said. “But meeting Mike Rowe was pretty cool.”