His wife is drinking too much diet soda 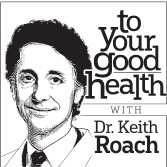 DEAR DR. ROACH: My wife drinks in excess of 3 liters of diet soda a day, sometimes even more. She has colitis, for which she takes Lialda, and on her last visit to her primary care physician, her blood work revealed borderline bad levels in her liver. The doctor seems to think she needs to stop “drinking alcohol,” but I have been married to her for more than 30 years, and I know it’s not drinking that is causing this. We both consume only moderate amounts of alcohol. Could it be the chemicals in diet soda? — F.J.R.

ANSWER: Three liters a day is a lot of diet soda, and that much caffeine probably isn’t good for her. However, I don’t think it is likely to be affecting her liver. Mesalamine (Lialda and others) rarely can cause abnormal liver tests — specifically, high levels of the same enzymes that might lead a doctor to suspect alcohol use.

You didn’t tell me what kind of colitis your wife has, but ulcerative colitis, a form of inflammatory bowel disease, is associated with several kinds of liver problems, including fatty liver and primary sclerosing cholangitis, which is potentially severe. I don’t think either alcohol or diet soda should be blamed until she has had a more careful workup. I think a visit with her gastroenterologist would be wise.

DEAR DR. ROACH: I have read that one or two cups of coffee is good for your brain. Which is better: coffee or tea? Is it the caffeine that prevents dementia? — M.E.

ANSWER: First of all, the data on this subject is preliminary. That being said, there is data that suggests that people who drink two or three cups of coffee a day have a reduced risk of Alzheimer’s disease. The researchers have speculated, and some studies done on lab rats support that it’s the caffeine, and since regular coffee has much more caffeine than tea, coffee would be easier. However, there have been other studies suggesting that substances in tea besides caffeine may reduce Alzheimer’s risk as well.

I’m not recommending either coffee or tea based on this research. This data shows an association but doesn’t prove that coffee reduces Alzheimer’s risk. But if it’s your habit to drink a few cups of coffee, or a few pots of tea a day, it may reduce risk of dementia.

DEAR DR. ROACH: You had an article from a man that said he had his prostate removed and was wondering about taking testoster- one. You said he would likely have an increased risk of prostate cancer recurrence.

ANSWER: Even the best surgery can leave some prostate tissue in place. It’s also possible that some tumor cells spread before surgery. Any residual cancer can be stimulated, in theory, by taking testosterone. Fortunately, the available evidence so far suggests that this risk may be much lower than feared. Careful followup remains essential.