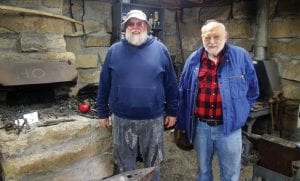 FORGING AHEAD – Bill Caudill (left), of Blackey, and Ron Stewart, of Glomawr, stand inside the blacksmith shop at the Leatherwood Memorial Park. The two are members of the Southeast Kentucky Blacksmiths Association, which built the shop from old cut stones gathered across Perry, Letcher and Knott counties. Caudill and Stewart spent Friday giving a living history lesson to students from schools across the region.

The grass quivers with each boom of the cannon, and the smell of black powder drifts on the breeze.

Not far away is single-file line of log cabins, a rough-lumber store and a stone blacksmith shop whose door is yards from a swinging bridge that crosses Leatherwood Creek.

And over there, on the far end of the field of honor, are 40 yellow school buses waiting to take the throngs of children from 1862 back to the future, October 25, 2019.

This is the Brashearville Historic Site in Perry County, three miles across the county line from Letcher County. Just for the weekend, the Battle of Leatherwood is still raging. The re-enactment of an 1862 battle between about 150 U.S. and Confederate soldiers at the Brashearville Salt Works is an annual event, and this year’s battle was the biggest ever. Close to 2,000 elementary, middle and high school students from Letcher, Knott, Leslie and Perry counties have come to the site to get an up-close look at Civil War history. 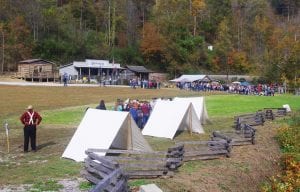 Above, Brashearsville, a salt works during the 19th century, is becoming a tourist attraction as local Civil War history hobbyists have moved log cabins from around the region to this park at Leatherwood. Close to 2,000 school kids visited the site last Friday for the living history lesson. Below, Wayne Watts of Sandlick, a retired first sergeant from the U.S. Army and a retired ROTC instructor at Letcher County Central High School, shows students how soldiers during the Civil War loaded percussion-cap muskets.

Walking across the field with David Chaltis of Letcher in his gray uniform and “General Lee” beard, is Gary Begley, dressed in Union blue. Begley waves at buildings along the way, rattling off what they were used for and from where they came.

The smokehouse, its bottom log licked smooth by cattle with a craving for salt, is from the Mayhew Farm on Leatherwood, the school from Everett Caudill on Big Branch in Perry County. The gift shop is from Pioneer Village in Knott County, the rough lumber store is built to resemble the Ern Watts store at Ul- vah in Letcher County, and the cabin where Jo Ann Oborski of Mount Sterling is spinning yarn and weaving cloth is the Vernon Cornett cabin from Gordon in Letcher County.

Next door, retired Letcher County Central High School art teacher Bill Caudill and Ron Stewart of Glomawr in Perry County are showing students around a blacksmith shop of which Begley is particularly proud.

“We built this out of cut stone out of here, Knott County and Letcher County,” Begley said. “Nobody who worked on this was under 60 years old.” 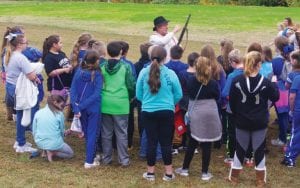 Perry County got the property from Dr. Marion Miniard, a retired dentist who grew up across the road from the park and now lives in Lexington. His parents donated the land for the Leatherwood Clinic and the fire department, and Miniard offered to give the land for the park — if the groups who do the reenactment could prove they could make something of it.

They did, and Miniard donated the property.

On the day of the reenactment, six buildings were accompanied by a couple of cannon and a few white canvas tents, but Brashearville circa 1862 is a growing town. Soon, the 230-year-old Johnson Cabin will make the trek from Redfox in Knott County to this field in Leatherwood. It will be the second time that cabin has been moved. It was moved from Amburgey to the Pioneer Village in the early 1970s, when Carr Creek Lake was set to be filled up and cover it. Before that, the cabin is reputed to have been in two different states and eight different Kentucky counties while sitting on the same plot of land.