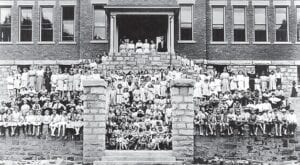 The Jenkins Independent School District was first organized as the Jenkins Graded School District on August 12, 1912 with schools at Jenkins (grades 1-12), Burdine (grades 1-8) and Dunham (grades 1-8). On April 26, 1915 McRoberts (grades 1-12) became part of the district. The schools were all within the boundaries of the Consolidation Coal Company holdings; Consol built the buildings and owned them until they deeded the properties to the district on June 30, 1946 for the sum of $14,171.50. (Board of Education minutes)

In 1931 the Jenkins District opened Dunham High School, which was the only high school in Letcher County for African American students. The first class of seniors graduated in 1935. With the integration of schools in 1964, Dunham High School was closed. (Carolyn Hollyfield Rodgers) 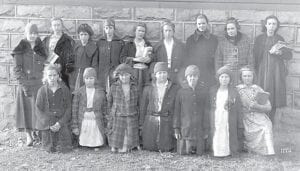 June 20, 1957 The Jenkins Independent Board of Education has agreed to transport all McRoberts High School students to Jenkins if the board can afford an additional bus and classroom space is available. It had long been the board’s goal to transport students in grades 9 through 12, leaving only the elementary school operating at McRoberts.

Today Jenkins Independent School is a pre-K through 12 school with two campuses — Jenkins Middle High School with students 6-12 and Burdine with Pre- K through 5 and the district has an enrollment of 400.

Photographs are from the Pittsburgh-Consolidation Photographic Collection 1910-1946.