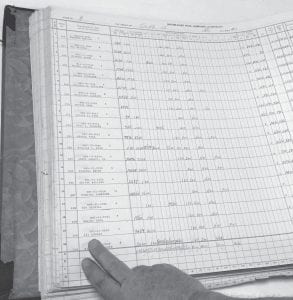 Letcher County residents with living relatives and ancestors who worked for South East Coal Company will find interest in a large payroll ledger on display at Seco Company Store. In this photo, store owner Jack Looney points to the name of his grandfather, Jim Looney. The entry for the pay period ending September 15, 1956 shows that Mr. Looney, who worked in the company’s No. 1 Mine, had seven dependents, spent $94.59 at South East’s Seco Store and $16 at its Millstone Store. He also paid $1 for using the bath house after his shift, $2 for the privilege of having a company doctor, and $4 in UMW dues. After Mr. Looney paid some on his store debt, he took home $186.85 from wages totaling $266.26. Also listed on the page are Jack Looney’s father, James Looney Jr., and his maternal grandfather, Harlan Thompson.