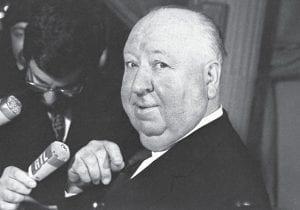 THE HITCHCOCK TOUCH — This 1972 file photo shows British film director Alfred Hitchcock. Nearly 40 years after his death, British film director Alfred Hitchcock remains a brand name in the thriller genre, not just among directors, but for crime writers who look to “Shadow of a Doubt,” “Vertigo” and others works as models for narrative and mood. Hitchcock is the only filmmaker to receive a “grand master” Edgar award from the Mystery Writers of America. (AP Photo)

As he wrote what has become one of the top-selling novels so far in 2018, “The Woman in the Window,” the author who calls himself A.J. Finn was thinking of a certain master of suspense: Alfred Hitchcock.

“Hitchcock proved that suspense can be just as effective — if not more so — than surprise; that restraint and taste could trump sensational scare tactics and cheap tricks; that style might enhance a story rather than overwhelm it,” Finn, pen name for the critic and literary editor Daniel Mallory, told The Associated Press recently.

“Above all, though, he emphasized psychology, from the Oedipus complex of Norman Bates to the folie a deux that binds the killers in ‘Rope,’ from James Stewart’s mounting obsession in ‘Vertigo’ to Teresa Wright’s reluctant coming of age in ‘Shadow of a Doubt.’ With ‘The Woman in the Window,’ I’ve tried to tap into his brand of timeless sophistication and that legendary psychological depth.”

Nearly 40 years after his death, Hitchcock remains a brand name in the thriller genre, not just among directors, but for crime writers who look to “Shadow of a Doubt,” ‘’Vertigo” and others works as models for narrative and mood. Although much of his work was adapted from novels and short fiction, Hitchcock is the only filmmaker to receive a “grand master” Edgar award from the Mystery Writers of America, a lifetime achievement prize that has been given to Agatha Christie, Elmore Leonard and James M. Cain. Hitchcock also received a Raven Award from the mystery association for his “contribution” to the genre.

“The term ‘Hitchcockian’ was invented to describe certain qualities that he exemplified,” says Paul D. Marks, a prize-winning crime writer. “He may not have invented all of them, but he certainly made them his own. Things like innocent people being accused or caught up in a series of events they don’t really understand, but have to figure a way out of. Average, normal people getting thrust into those situations, feeling a sense of vertigo (no Hitchcock pun intended) until they can get their bearings and get back to some semblance of their normal lives.”

Otto Penzler, a leading editor of crime fiction and owner of the Mysterious Bookshop in Manhattan, says that Hitchcock’s mastery of showing ordinary people caught up in events beyond their control can be found in the fiction of Thomas H. Cook and Alan Furst, among others. He also cited Mary Higgins Clark as one who “fully understands the Hitchcock methodology.” Clark, one of the world’s top thriller writers, told the AP in a recent email that she admires

Hitchcock’s “ability to create tension before the main character is even aware of the impending danger.”

“The reader is thinking ‘be careful’ as the protagonist, unsuspecting, puts herself in danger,” Clark wrote to the AP. “I think my book ‘A Cry in the Night’ is an example of this technique. Again, insinuating suspense before it is realized by the central character makes the reader feel helpless and creates wonderful drama.”

“The shows on the series do share more elements in line with short stories — the narrative arc, and the ironic payoff at the end,” Landrigan said.

Over the years, the Hitchcock magazine has published Evan Hunter, Donald Westlake and numerous other well-known authors. Some submissions end up as Edgar nominees, such as Jim Fusilli’s “’’Digby, Attorney at Law,” a finalist for best short story in 2010. This year, S.J. Rozan’s “Chin Yong-Yun Stays at Home” received an Edgar nomination for best story.

Michael Mallory, a film historian and crime writer whose books include the “Amelia Watson” mystery series, said he was influenced by Hitchcock and by writers whose books he adapted, including Robert Bloch, whose novel “Psycho” was the basis for Hitchcock’s horror classic. Mallory says his most “overtly Hitchcockian story” is set on a boat, like Hitchcock’s “Lifeboat,” although closer in spirit to “Psycho.”

“A guy invites a friend for an afternoon of fishing on his boat, because he’s such a good chum,” he says. “But it turns out the friend has done him some dirt, and the guy wants revenge. So once they get into shark-infested waters, the boat owner takes a machete and murders his friend … making him his ‘chum.’”