Hits from ’80s are the new oldies 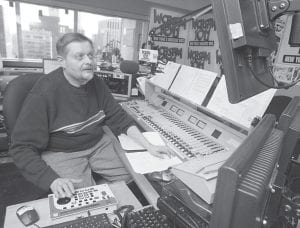 Bob Shannon, radio personality on New York’s WCBS-FM, talked between songs recently. The station has adopted a new format that features hits from the 1980s, along with oldies mainstays from the ’60s and ’70s and the occasional ’50s tune, and it seems to be working: The station jumped to No. 3 in the ratings a few months after the change. (AP Photo)

The music blaring from the speakers of a small pub on a recent Friday night seemed like typical oldies fare: Aretha Franklin’s “Respect,” the 1970s tune “Disco Lady” and the 1950s surf instrumental “Tequila.” Then, “Karma Chameleon” – the 1983 hit by Culture Club – came on.

The music was from WCBSFM, a New York-based station that used to rely on songs from the ’60s and ’70s, and occasionally, the ’50s. Now, like similar stations around the country, WCBS has deemed music from the ’80s as the new oldies.

Not that the station calls them oldies – “Classic Hits” is the favored term.

Station executives say the decision makes perfect sense considering the changing demographics of radio. Research found that the traditional oldies audience was moving out of advertisers’ coveted 25-to-54 demographic, and that adding ’80s would be a good way to maintain that lucrative audience.

Oldies stations across the country are evolving for similar reasons. WQRV-FM in Huntsville, Ala., formerly an oldies station, changed to Classic Hits two years ago. They dropped the ’60s and now play ’70s and ’80s. KQLL-FM in Tulsa, Okla., converted to a Classic Hits station last year. They no longer play early ’60s music. The format changes were ratings successes.

Thomas says the incorporation of ’80s music isn’t that different from the station’s original oldies days.

Changing to Classic Hits is “like the Senior Tour in golf now being called the Champions Tour,” he said. “It’s the same age group, but they don’t consider themselves seniors.”

The origins of the format switch date back a few years.

WCBS-FM started in 1972 and grew to become the nation’s No. 1 oldies station and New York’s No. 8 in Arbitron ratings. But in 2005, the station changed formats to “Jack.” Considered to be the hot trend in radio programming, “Jack” was designed to attract a younger crowd by playing songs from the ’70s through the most recent releases at the time.

But the station’s ratings plummeted.

The station scrapped the “Jack” format last summer in favor of “New York’s Greatest Hits.” The new format seems to be working: The station jumped to No. 3 in the ratings a few months after the change.

One is literal, meaning it’s music from years ago. The other defines it as a genre – specifically ’50s and ’60s rock.

Bob Shannon, one of WCBSFM’s popular on-air personalities, said the term may be obsolete.

“Music is everywhere now – it’s in commercials, movies, on the Internet,” said Shannon. “It’s not just about good times and good memories anymore. It’s about good music. It transcends the time period.”