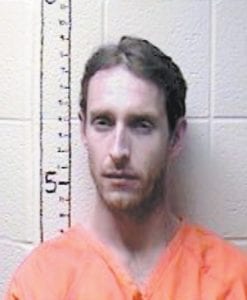 This mugshot of James Huffman IV was taken shortly after his arrest for murder in January 2014.

A suspect in the New Year’s Day 2014 murder of Michael Shane Hogg has been cleared of separate charges filed against him in December 2013.

The Mountain Eagle has learned that a judge in Pike County recently dismissed several charges that had been filed against James R. Huffman IV, one of two Pike County men accused of stabbing Hogg to death after a New Year’s Eve celebration in downtown Whitesburg, after Huffman engaged in an hour-long standoff with Pike County sheriff ’s deputies on December 4, 2013.

The standoff occurred after the deputies attempted to serve a warrant for his arrest on an earlier drug possession charge.

After that incident, Huffman was charged with first-degree criminal trespassing, second-degree disorderly conduct, menacing and harassment.

All charges were recently dismissed “with prejudice,” meaning the charges can’t be brought up again no matter the circumstance.

Letcher Commonwealth’s Attorney Edison G. Banks II said he also learned about the dismissal of the Pike County charges against Huffman, but declined to say whether the dismissal of those charges would have any effect on the prosecution of Huffman.

Meanwhile, Huffman, 35, appeared in Letcher Circuit Court on Tuesday for a pretrial conference in the murder case against him. A trial date still has not been set.

A second man accused in the case, 28-year-old Patrick Smith, also of Pike County, is scheduled to appear for his pretrial conference in Letcher Circuit Court at 2 p.m. next Tuesday.

Huffman is accused of stabbing the 24-year-old Hogg to death and wounding two other men during the incident that occurred on Whitesburg’s Hayes Street, also known as Back Street, around 2 a.m. on January 1, 2014. Authorities believe Smith, a Marine veteran, kept Hogg, a popular Eastern Kentucky University student who was at home for Christmas break, pinned down while Huffman stabbed Hogg as many as eight times, six of which were in the back.

Authorities say the incident was the result of a disagreement that occurred after Huffman and Smith “became inappropriate” with two women who had been celebrating the New Year with Hogg and two other men.

Wright ruled that Huff- man’s defense team cannot use the video surveillance recorded inside or outside of StreetSide Bar and Grill, Summit City or one of two local banks because the tapes were obtained “solely by improper use of subpoena deuces tecum,” or subpoenas demanding production of evidence.